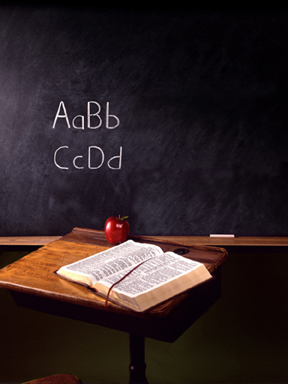 When Nathan De La Garzas youth pastor challenged his group of teens to carry their Bible everywhere they go, Nathan accepted the challenge. The teenager, who attends Racine Assembly of God is a sophomore at Park High School.

But when he brought his Bible to school with him, he found himself in the Principals office. According to the Journal Times, one teacher didnt approve of his discussing his faith with a friend, during a time when students were allowed to talk. The teacher asked him to stop talking about religion, and then when De La Garza came to class the following day, he was sent to the Principals office.

According to the teachers version of the story, the classroom discussion kind of turned into a debate, which she said was disruptive to the class.

The Principal told De La Garza to stop talking about religion during class and to keep it to lunch and out of school.

Carrying his Bible everywhere he goes has attracted attention. He explained to the Journal Times, People are like, Is that a Bible?

The simple act of carrying Gods Word with him has opened up many opportunities to share his faith, and several students at the school have visited his churchs youth group after speaking with him.

De La Garza has had an opportunity to discuss Christianity with a Jehovahs Witness and even a Muslim girl. But he said, The atheist people, they try gang ...