Bizarre Bird, Fish and Animal Deaths: Apocalyptic Signs of the End of the World? 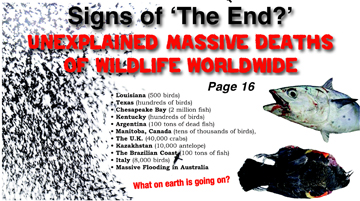 On Wednesday morning, January 5, I received an unexpected phone call from Michael Sheridan, a reporter for the New York Daily News, who was writing an article about the mysterious demise of 5,000 blackbirds in Arkansas that suddenly dropped dead from the sky on New Years Eve, 2010. Adding to the mystery, at nearly the same time, 100,000 fish carcasses washed up on the shore of the Arkansas River approximately 125 miles away. Whats your take on these bizarre events? Mr. Sheridan inquired. Are they signs of an approaching end of the world?

Believe it or not, this question is on many minds, especially considering additional recent reports of massive creature deaths in Louisiana (500 birds), Texas (hundreds of birds), Chesapeake Bay (2 million fish), Kentucky (hundreds of birds), Argentina (100 tons of dead fish), Manitoba, Canada (tens of thousands of birds), the U.K. (40,000 crabs), Kazakhstan (10,000 antelope), the Brazilian coast (100 tons of fish), and Italy (8,000 birds).

What on earth is going on?

Multiple theories have been advanced, such as environmental toxins, stress, fireworks, lightning, or poisonous gas; but at this moment, the jury still seems to be out. Fish and Game Departments are still running tests. Labs are performing autopsies. We should know more soon.

Evidence that the general public has been deeply stirred by these eerie events and fear apocalyptic forebodings was plainly manifest last week when Left Behind mov ...