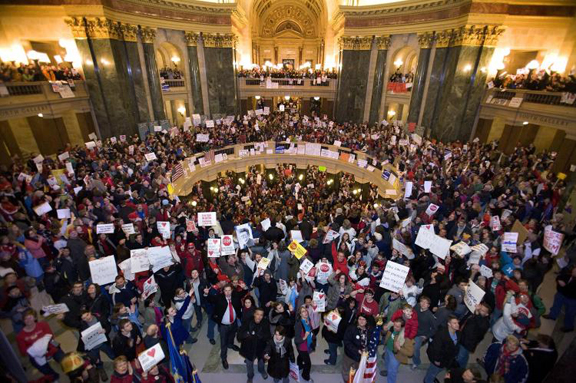 Weeks into the standoff in Madison, a resolution finally arrived. The crisis began in January when the Legislative Fiscal Bureau calculated that tax revenues are down, and several programs would be facing significant shortfalls this spring.

As a result, on Friday, February 11, Governor Scott Walker introduced a budget repair bill to cover the $137 million deficit in the current year state budget. This amount is the shortfall that is needed by June 30, 2011 to cover existing obligations. The controversial bill proposed having government workers contribute half of the cost of their pensions and 12% of the cost of their health care premiums. In addition, it removes the power of public sector unions to bargain for non-salary issues.

On February 15, the Joint Finance Committee began hearings on the bill and heard from hundreds of concerned legislators, students, government officials, taxpayers, and more. In addition, approximately 15,000 people filled the capitol to protest the budget repair bill. Students began a sleep-in at the Capitol that night, and the Madison Metropolitan School District announced they would be cancelling classes the following day because 40% of the 2,600 members of the teacher bargaining unit called in sick. Madison schools would be closed for three days in a row due to teacher walk outs.

At 3 AM the next day, the Joint Finance Committee stopped the hearing, and later that night approved the bill on a 12-4 party line vote. Add ...