Jerusalem — A Burden to the World 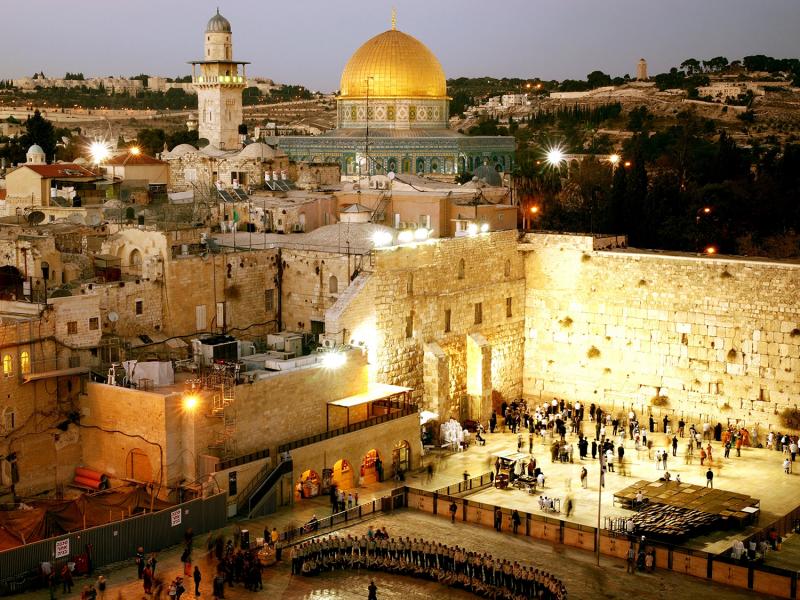 Complimentary Story
“O Jerusalem, Jerusalem, who kills the prophets and stones those sent to her, how often I have longed to gather your children together, as a hen gathers her chicks under her wings, but you were unwilling! Look, your house is left to you desolate. For I tell you that you will not see Me again until you say, ‘Blessed is He who comes in the name of the Lord’.”  (Matthew 23:37-39).

A year after I was born, Israel was reborn. Of course, at age 1, I did not have a clue to the significance of that day, May 14, 1948, nor did I know of the numerous biblical predictions of Israel’s return to center stage.

As a kid, I went to Sunday School and sometimes, church, but I was 32 before I began to learn about these 2,700-year-old prophecies. That is sad. Until I read Hal Lindsey’s The Late Great Planet Earth and was introduced to biblical prophecies concerning the Last Days, I was unsure if God really existed. The more I read, the more I was convinced that prophecy was the proof of the pudding.

After Presidents Bill Clinton, George W. Bush and Barack Obama campaigned on and promised a move of the U.S. Embassy in Tel Aviv to Jerusalem, Israel’s eternal capital; there was finally a president who was actually planning to do what he said he would do. President Trump moved the U.S. Embassy in Israel from Tel Aviv to the forever-capital of Israel, Jerusalem. The United States became the first country to recognize Jerusalem, the City of David, as the capital of Israel. I am not sure President Trump knew the significance of this move in prophecy.
So what did the ancient, Jewish prophets say about Israel and her return in the Last Days?

“In that day, I will restore David’s fallen shelter.  I will repair its broken walls and restore its ruins and will rebuild it as it used to be, so that they may possess the remnant of Edom and all the nations that bear my name,” declares the Lord, who will do these things.

“‘The days are coming,’ declares the Lord, ‘when the reaper will be overtaken by the plowman and the planter by the one treading grapes. New wine will drip from the mountains and flow from all the hills, and I will bring my people Israel back from exile.

“‘They will rebuild the ruined cities and live in them. They will plant vineyards and drink their wine; they will make gardens and eat their fruit. I will plant Israel in their own land,   never again to be uprooted from the land I have given them,’ says the Lord your God.”  (Amos 9:11-15 NIV).

Amos, a shepherd, lived in Tekoa, a village in Judah, southeast of Bethlehem. Amos, though from Judah, prophesied God’s messages to the 10 tribes of Israel in the north, telling the leaders to get back to God or else. He wrote from about 760-750 B.C. and predicted the restoration of Israel after her exile, in the Last Days.

And another: “This is what the Lord Almighty says: ‘I will save My people from the countries of the east and the west. I will bring them back to live in Jerusalem; they will be My people, and I will be faithful and righteous to them as their God.’”  (Zechariah 8:7-8 NIV).

Zechariah wrote his prophecies about 520 B.C. and probably saw the rise of the Greek Empire. Zechariah’s book is one of the last in the Old Testament and in many ways, parallels Revelation. There are similarities between Zechariah’s visions and the four horsemen of Revelation, the measuring of Jerusalem and the flying scroll.

The prophet Isaiah had a lot to say about the restoration of Israel to her ancient lands, and he wrote from about 700-680 B.C.  Like Zechariah, Isaiah was from Judah.

“Do not be afraid, for I am with you; I will bring your children from the east and gather you from the west. I will say to the north, ‘Give them up!’ and to the south, ‘Do not hold them back.’ Bring My sons from afar and My daughters from the ends of the earth — everyone who is called by My name, whom I created for My glory, whom I formed and made.”  (Isaiah 43:5-7 NIV).

“Who has ever heard of such things? Who has ever seen things like this? Can a country be born in a day or a nation be brought forth in a moment? Yet no sooner is Zion in labor than she gives birth to her children.”  (Isaiah 66:8 NIV).

Jeremiah wrote from about 585-500 B.C. and was a priest in the town of Anathoth. Jeremiah was known as the “weeping prophet” because of all the doom and gloom he predicted would befall Israel and the world.

“I myself will gather the remnant of My flock out of all the countries where I have driven them and will bring them back to their pasture, where they will be fruitful and increase in number. I will place shepherds over them who will tend them, and they will no longer be afraid or terrified, nor will any be missing,” declares the Lord.

“The days are coming,” declares the Lord, “when I will raise up for David a righteous Branch, a King who will reign wisely and do what is just and right in the land. In his days Judah will be saved and Israel will live in safety. This is the name by which he will be called: The Lord Our Righteous Savior.

“I will surely gather them from all the lands where I banish them in my furious anger and great wrath; I will bring them back to this place and let them live in safety.”  (Jeremiah 32:37 NIV).

The prophet Ezekiel wrote his book from 593-571 B.C. and came from a priestly family who served in the Jewish Temple. He was captured and taken into captivity in 597 B.C. by King Nebuchadnezzar of Babylon. Ezekiel contains more dates than any other Biblical record. Ezekiel received a vision of the millennial temple that was to be established by the Messiah upon his return in the Last Days.

“Therefore say: ‘This is what the Sovereign Lord says: Although I sent them far away among the nations and scattered them among the countries, yet for a little while I have been a sanctuary for them in the countries where they have gone.’

“Therefore say: ‘This is what the Sovereign Lord says: I will gather you from the nations and bring you back from the countries where you have been scattered, and I will give you back the land of Israel again.’”  (Ezekiel 11:16-17 NIV).

“‘This is what the Sovereign Lord says: When I gather the people of Israel from the nations where they have been scattered, I will be proved holy through them in the sight of the nations. Then they will live in their own land, which I gave to my servant Jacob. They will live there in safety and will build houses and plant vineyards; they will live in safety when I inflict punishment on all their neighbors who maligned them. Then they will know that I am the Lord their God.’” (Ezekiel 28:25-26 NIV).

With all these prophecies about Israel’s return to her land in the Last Days, it had to happen. It is also evident that the return includes a return to Jerusalem.

The TV news was aghast at what the move of our embassy to Jerusalem might mean for Israeli peace with the Palestinians.  I saw the wringing of hands among European leaders, that recognizing Jerusalem will anger the Palestinians who consider Jerusalem as their capital.

Don’t you have to be a country or nation to have a capital? Palestine is a territory and has never, ever been a nation or country.  Jerusalem has never been their capital. The Muslims are experts at calling a rose a lily and know that if they say it enough, the lemmings will believe.

King David was the greatest king Israel ever had, because they missed out on Jesus by their rejection. Jerusalem was called the City of David.

Will the Palestinian Arabs get angry?  The Arabs and the Persians (Iranians), the Sunni and the Shi’a, have been mad at the world and each other for thousands of years; and indeed, there will be a war.

Prophecy of the Last Days is playing out right in front of the eyes of the world. I think it is exciting and am glad I am here to see it.

“On that day, when all the nations of the earth are gathered against her, I will make Jerusalem an immovable rock for all the nations. All who try to move it will injure themselves.”  (Zechariah 12:3 NIV).

President Trump recognized Jerusalem as the capital of Israel, and the embassy moved to Jerusalem, 1:07 PM EST December 6, 2017.   A date that will always be significant.

JL Robb is author of the internationally renown 7-book series: The End The Book. Read more at web site www.TheEndTheBook.com. The only prophecies that have not occurred are those referring to the Last Days, but those days are looming, as evident on the nightly news.