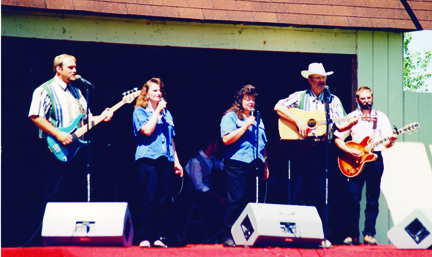 When you hear about a Gospel Bluegrass Festival taking place in Wisconsin today, most everyone will know what that is. But that was not always the case. Truman Stricken grew up with Bluegrass. Steeped in music in Tupelo, Mississippi - the same town that was home to Elvis Presley - he quickly came to miss the familiar strains of the banjo and mandolin when he moved to his wifes hometown - Ladysmith, Wisconsin - in 1984.

He explained, This style of music started back in the 1940s. It was known as Mountain Music and was made popular in the south by Bill Monroe. He was known as the Father of bluegrass music because it was named Bluegrass after his band - the Bluegrass Boys, which he named after the grass that grew in his home state of Kentucky.

Traditional Bluegrass music has always been good and wholesome, with a strong emphasis on family, Pastor Stricklen said. Bill Monroe brought the style of music, but then his friends, the Sullivan family added the gospel part.

The Stricklens pastored a church in Exeland, Wisconsin until 1989, when they founded Living Waters Church just north of Bruce. One of the first things Pastor Stricklen did was invite the Sullivans up to Wisconsin to perform a concert of Gospel Bluegrass music for his small church family.

He also became acquainted with Pastor George Olinske who led the Kings Trio. And so the genre of Gospel Bluegrass Music came to Wisconsin, where it has had a home ever since.