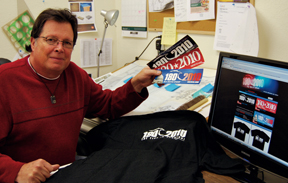 Experience has shown, that even under the best forms of government those entrusted with power have, in time, and by slow operations, perverted it into tyranny. -Thomas Jefferson

Ever since the 2008 elections, Wausaus Jim Merritt has followed the actions of our new congress and the direction they have taken our country. Like a great many Americans, Merritt has been frustrated with our countrys recent run toward socialism and out-of-control government spending. Our elected officials have turned away from the principles of our U.S. Constitution and the role of government as our Founding Fathers intended, said the California native. They are leading our country in the wrong direction!

As he watched the huge turnouts at TEA Parties and Townhall meetings nation-wide, Merritts frustration slowly turned to hope. For a while, everything I read, watched on TV or listened to on the radio pointed to the importance of the 2010 political elections, he said. I soon realized that if we mobilized - and truly worked at this - we could effectively reverse the direction of our country at next years ballot box.

The numbers 180 2010 continually struck a cord with Merritt. I saw the potential of a grass-roots effort generating a 180-degree turn around in the 2010 elections. I visualized vehicles all across America displaying a 180 2010 bumper sticker.

Merritt explained his idea to wife Katrina and close friend Jason Troxell. Both shared his enthusia ...