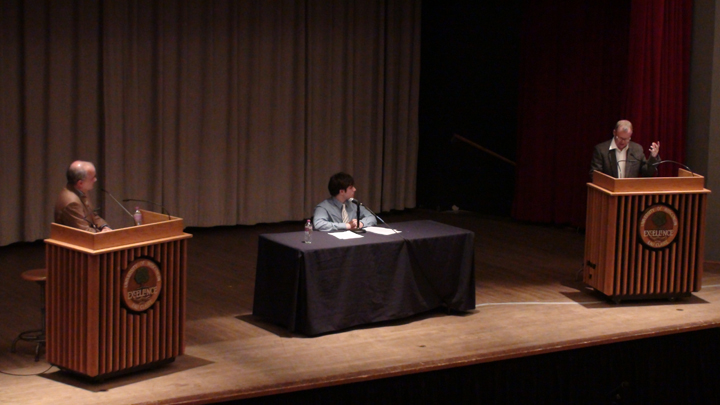 As he introduced himself to the one hundred people in attendance for The First Amendment: a Discussion of Religious and Secular Perspectives, debate April 14 at UW-Eau Claire, Pastor Wade Duroe joked, This is my first time ever speaking at a public forum like this and depending upon how it goes, it may very well be my last. Duroes performance against minister-turned-atheist, Dan Barker, suggests it should be anything but his last such performance.

In the two hour-plus forum centered on the separation of church and state, Barker, co-President of Madisons Freedom from Religion Foundation, contended, Most Christians, most Jews, most believers in this country support the wonderful American principle of the separation of state and church.

Believers and non-believers, including millions of good Americans who are not only convinced that theres no God, that belief in God is a delusion, and that books like the Bible are unreliable sources of truth, Barker said.

Barker unleashed a variety of harshly derogatory criticisms on the Bible, including calling it an insulting, immoral source of truth, contradictory on historical, unscientific.

He went on to say, Most of us who call ourselves free thinkers prefer reason and kindness over slavery and superstition and we think its wonderful to be living in a country where the believers are respected as well as the non-believers.

When given a chance to respond, Duroe provided quite a contrast to ...