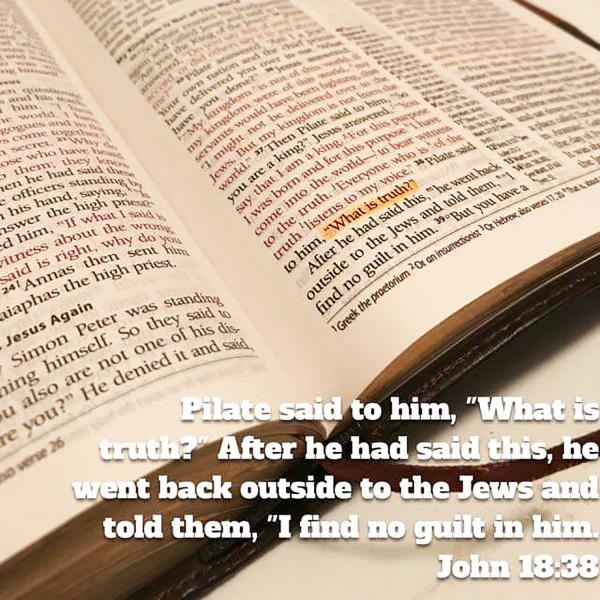 Complimentary Story
“Jesus answered, ‘My kingdom is not of this world. If My kingdom were of this world, My servants would have been fighting, that I might not be delivered over to the Jews. But My kingdom is not from the world.’ Then Pilate said to Him, ‘So you are a king?’ Jesus answered, ‘You say that I am a king. For this purpose I was born and for this purpose I have come into the world — to bear witness to the truth. Everyone who is of the truth listens to My voice.’ Pilate said to Him, ‘What is truth?’ After he had said this, he went back outside to the Jews and told them, ‘I find no guilt in Him.’” (John 18:36-38 ESV).

We live in a world where society says what is right and wrong, good and bad. Politicians, Hollywood, the media, and ‘pop culture’ try to define truth in whatever way is convenient for their agenda at that time. We have turned our backs on God because of the hardness of our hearts, and exchanged His truth for a lie. We tell ourselves all sorts of “feel good” things because if we do not fan the flames of our wickedness constantly, we will burn down to the bitter ashes the enemy wants us to be instead of being on FIRE for God.

It is for this reason our society has tried to erase the existence of God, as if we could actually do such a thing.  We have exchanged the government, which God and the founders gave to us, for a corrupt system of wickedness in which we reward lawlessness, corruption, and deceit. In our grand experiment, we have tried and failed to legislate morality. Not once, but over and over again. We have changed from God’s ways to our ways so that it can be more difficult not to offend people. We have become obsessed with our ever-growing infatuation with not offending anyone (except Christians).  We spend every penny and nearly every waking moment worrying about either what people think or how to please ourselves or others.

Only Jesus can change you, help you, heal you, strengthen you, save you, and restore you! He does that through His Word, His Spirit, and His Body (other believers). Do not be comfortless in the wicked world of worry and shame because of sin. Do not give up hope or be powerless by believing the lie that God no longer works in us anymore.

I had to accept that my worth has to be rooted in Christ’s righteousness and not in my own. As hard as it was for me to accept, God did not just see my intentions and forgive my actions. God sees all the heart and all the mind. He finds us all unworthy. Once I accepted that God was not wanting a relationship with me because of my worth, but because of His love for me, I found the freedom I had been looking for.  Find your freedom in Christ today!

My worth is now based on the FACT that God robed Himself in flesh as Jesus Christ and died on the cross for my sins, to redeem me to Him, because I had value in His eyes, not my own. I fought the fact that I would have to throw out the way of thinking that I had grown accustomed to. However, when you are faced with the truth, what can you do?  I always wondered what the answer would’ve been to Pilate’s question, “what is truth?”   Do you wonder?  Do you know what truth is? I know now that the truth is that the lies of the enemy and his system of judgment and condemnation, of questioning yourself and God, has been absolutely CRUSHED in Jesus Christ and the redemptive work He did for you and I on the cross.

Find out for yourself the power of freedom that exists for you in Jesus Christ! Let the Holy Spirit indwell you and fill you. Sometimes you just have to take a leap of faith. Commit to walking with Christ! Walking is an action, and you will need to take action. If you are expecting to have a “light switch moment,” you are going to be in for disappointment, most likely. Very few times do I believe that happens. I think God wants us to take that step of faith.

Peter walked on water because he had faith and he took action on that faith. Take action on your faith!  Believe in Jesus and receive Him!  Do not look to yourself or feelings and emotions to evaluate your walk – that is when Peter sank!  Keep your eyes on Jesus Christ through His Word. Let His Spirit guide you in the TRUTH of HIS WORD!