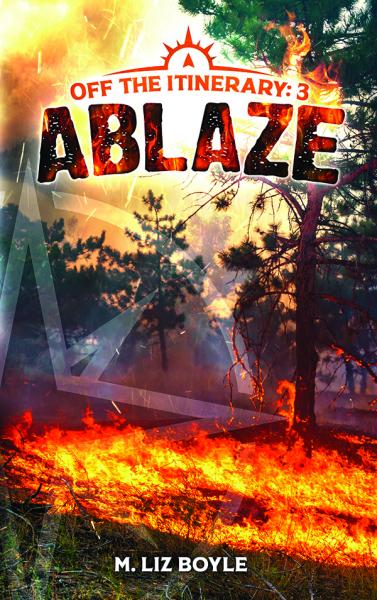 Complimentary Story
If you’ve been reading my articles, you know that I love God, adventure, and good books. The past months I’ve shared with you excerpts from my first two books, Avalanche and Chased. It may not surprise you that after sending my five teenage characters through an avalanche and then a flash flood, I chose to subject them to a wildfire in the finale of the series. First snow and ice, then raging waters and a raging treasure hunter, and now onto a forest fire. Why fire? Obviously a wildfire is a high excitement natural disaster, so the energy of a blazing forest fits right in with my series. In addition to being the most obvious next disaster to face, I like the character refinement that goes with fire.

In several passages, the Bible talks about precious metals, symbolic of people, being refined in fire. Refiners’ fires get rid of the impurities, the low quality junk. While the precious metal can endure the high heat, the dross floats up and is whisked away. If the dross is not removed, the metal cannot be used. It would be weak, of low value, and a very long way from a piece of jewelry or usable vessel. God knows that like impure metals, we need a lot of refining to reflect His image. The refiners’ fire, in the form of challenges and trials in life, bring to light our human nature and sinful habits. We need to skim off the spiritual dross.

Maybe you can look back on seasons of your life when you were tested and came out stronger. Maybe you’re currently in the fire, so to speak, and are being purged of dross — you know, those habits that get in the way of our spiritual growth. It’s never easy going through the fire, but we can trust that God isn’t burning us; He’s shaping us into His image. The heat and pressure prepare us to be valuable members of His family.

In my third book, Ablaze, the main character Marlee, who is now 17, learns what it means to be a leader. This summer Marlee, her sisters and the Miles boys are excited to hike together again, and now they have the unique opportunity to help two of their ranger friends with an outdoor program in the beautiful Montana mountains. Marlee has always considered herself a willing follower. Give her a direction and she’s happy to help. Her older sister, Ellie, is a natural leader, and Marlee is content in her role as assistant. Marlee and her sisters have been assigned to help with Ranger Rose’s team, and they are savoring the adventure. But in a heartbeat, while the group is divided by a few hundred feet, fire breaks out between Ranger Rose and Marlee’s group. In this enthralling finale to the Off the Itinerary series, Marlee must face her fears with courage that only God can provide.

Like the wildfire she’ll experience, learning to lead is scary and uncomfortable for her. After being mistreated by an old friend, Marlee doesn’t feel able to lead anything. More than anything she tries to avoid leading and getting burned, but these are just what she needs to reach her character arc. She has to go through the fire and learn to lead. Just like the unrefined metal, if Marlee didn’t lead a group through a wildfire, she wouldn't reach her full potential.

Perhaps you know someone who could use some encouragement as they face character refinement. If so, remind them that God is the great crafter who has a beautiful goal in mind and that they will be closer to that finished product when they’re on the other side of the fire. Remind them that God won’t allow more testing than they can handle and that He will not leave them alone in the fire. If the person is a reader, share Ablaze with them.

One of my readers says: “I loved how Marlee had to really step out on her own in this, dealing with all kinds of peer pressure and personal insecurities. It is hugely relatable; I’m pretty sure every teenager knows what it feels like to second guess themselves. However, Marlee really stepped up to the plate, overcoming all kinds of adversity, all with her feet firmly rooted in God and his truth. I rate Ablaze a solid 10 out of 10.”

Reading a story of someone (even fictional characters as we discussed in January!) who endures a trial can be very encouraging. We can take those lessons and apply them in real life, being reminded to stay grounded in God so that we can come out of the fire refined, with our old dross whisked away.