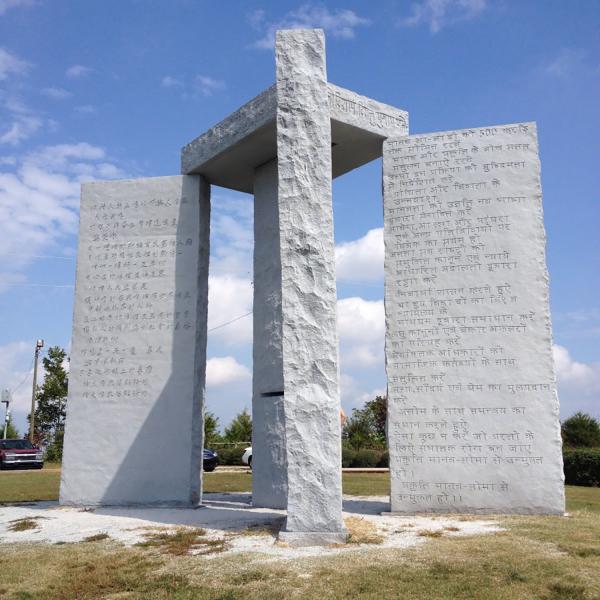 Complimentary Story
On the highest hill in northeastern Georgia stands a huge, star-shaped granite monument.  There are only a few clues as to how this monument, known as the “Georgia Guidestones” came to be in this place, but it’s message and intent is clearly Luciferian and anti-God. Today, as we hear of the plans of the New World Order globalists and their “Great Reset,” which has now begun in earnest, we can see that what these Luciferians are bringing to pass in the world now has been carefully planned out and purposesly orchestrated over many decades.

The Georgia Guidestones are made of Pyramid Granite, consisting of a large, vertical center slab, four slabs surrounding it and a 26,000 pound capstone on top. They’re more than 19 feet tall.  The ten messages on the Guidestones have been called “The Ten Commandments of the Antichrist,” and are written in English, Spanish, Swahili, Hindi, Hebrew, Arabic, Traditional Chinese, and Russian.  The messages deal with human depopulation, earth worship, a One-World Government and New World Order.

The Guidestones were built to withstand any natural or man-made disaster, even a nuclear blast. Here are the ten messages inscribed on them: 1). Maintain humanity under 500,000,000 in perpetual balance with nature.  2). Guide reproduction wisely – improving fitness and diversity.  3). Unite humanity with a living new language.  4). Rule passion – faith – tradition – and all things with tempered reason.  5). Protect people and nations with fair laws and just courts.  6).Let all nations rule internally resolving external disputes in a world court.  7). Avoid petty laws and useless officials.  8).Balance personal rights with social duties.  9). Prize truth – beauty – love – seeking harmony with the infinite.  10). Be not a cancer on the earth – Leave room for nature.

A shorter message is inscribed at the top of the structure in four ancient languages: Babylonian cuneiform, Classical Greek, Sanskrit, and Egyptian hieroglyphs.  It reads: “Let these be guidestones to an age of reason.”

In the summer of 1979 a well-dressed, elequently-speaking gray-haired man calling himself “R. C. Christian” came to Elberton, Georgia in search of both a granite firm to build his design for a monument and a suitable site for the construction of it.  He said he represented “a small group of loyal Americans” who had been planning the installation of an unusually large and complex stone monument. The man admitted that ‘Christian’ was a pseudonym, and while he was obliged to reveal his identity to the local bank manager, this was under on condition of absolute confidentiality. To this day, the man’s real name and the true identity of his organization are unknown.

He presented the granite company a wooden model and ten pages of detailed instructions as to how the monument was to be built. And money was no object — even though the price quoted was many times higher than such a project would normally cost, this man readily agreed to pay it, no questions asked.

The Guidestones were unveiled in March of 1980.  Ownership of the land and monument was soon transferred to Elbert County, which still holds it. But why place such a monument in virtually the middle of nowhere — 90 miles from Atlanta surrounded by farm fields? Perhaps one clue is that the Cherokee Indians believe this spot to be the geographical center of the universe.

The Guidestones were precisely engineered to track the movements of the sun and stars. Depending on where people stand and which slots or holes they peer through, visitors can see the sunrise during an equinox or solstice or locate the North Star.  The stones function as a clock, calendar and compass and they track the sun’s movement year-round.

But it’s the ten messages on the Stones that should concern us today, as we find ourselves in the midst of a globalist eugenics program known as ‘COVID 19.’  The first of the messages indicates we should maintain human population under 500 million people. To achieve that “goal,” we would need to reduce the number of human beings on the planet by 90%. Then there’s the message about “wise reproduction” and the value of so-called “diversity.” And calling human beings, made in the image of God “a cancer on the earth.”  All of these statements  fly in the face of Almighty God’s command to us to “be fruitful and multiply and fill the earth.”

Then there’s the part about uniting humanity with a new One-World language. Do you remember the history of the tower of Babel?  Resolving disputes in a “world court,” abandoning personal rights and freedoms in order to fulfill our “social duties.”  And of course, the idea of “reason” has long been a buzz-word among zealous athiests and God-haters.

Many believe the Georgia Guidestones were a project of The Club of Rome. You may not be familiar with this. I wasn’t until I dug into the research for myself. The Club of Rome, founded 1968, is one of a number of organizations founded or funded by David Rockefeller (the youngest son of John D. Rockefeller) to further the cause of global government, including the United Nations.  Members of the Club of Rome have included some of the wealthiest and most powerful people in the world, including CNN founder Ted Turner, George Soros, Henry Kissinger, Bill Gates, Prince Philip, Al Gore, Maurice Strong (who co-authored “The Earth Charter” along with Mikhail Gorbachev), and Bill Clinton.

The Club of Rome has four stated main goals: World Government, Human Depopulation, Environmentalism at the expense of humanity, and a One-World Religion.  These goals of the Club of Rome were openly stated as far back as their beginning in 1968. In 1980 the Georgia Guidestones were unveiled, again clearly stating the goals of a New World Order and human depopulation. But all of this is trumped by the Word of God, which has prophesied the days we’re living in now for thousands of years. God TOLD us what these Luciferians were going to do. Now the Luciferians themselves are openly telling us their plans, yet so many seem to think this is all conspiracy theory nonsense. As I’ve said before, there IS a conspiracy going on, but it’s far from a theory.

Klous Schwab, born in Germany in 1938 is the Founder and Executive Chairman of the World Economic Forum. He’s stated openly that a key component of the Great Reset is that individuals worldwide will own nothing.  According to Schwab, private ownership of homes, cars, bank accounts, land... all of it, MUST be abolished, in order to provide for a more “fair” outcome for all. This is pure Communism, folks, and this “Great Reset” has already begun...and nearly every country in the world is on board with this.

Do some research on some of the key players in this COVID scheme. Look at Fauci, the CDC, (which would be more aptly named the “Center For Disease Creation”), the World Health Organization, The FDA, and every entity associated with Big Pharma. Then look at the Globalist organizations such as the UN, the World Economic Forum, the Federal Reserve, the IMF, the World Council of Churches, the Club of Rome. Then consider how all mainstream media in the world is owned by a tiny handful of people. Now look at who controls the internet and social media. You will find that every player is a New World Order Globalist, and through the well-planned scam of ‘COVID,’ they’ve set the stage for not only world domination but serious human depopulation — planetary genocide.

Let me explain it another way: they’re purposely killing people. The COVID virus is real, but it was weaponized by Fauci and the Chinese Communists, with the aid of all the players just mentioned, and funded with our American tax dollars. It was unleashed on the world in late 2019 and early 2020, then super-hyped by the complicit Mockingbird Media. If you’re unfamiliar with “Operation Mockingbird,” I suggest you research how the CIA is also complicit in all this — along with our FBI, our judicial system, and the highest levels of our government, and governments worldwide.

The virus, similar to the common seasonal flu virus, was hyped by the media as a “super killer.” Fear was instilled among the people. Mask-wearing and quarantining of the healthy was mandated for only one reason: to keep us all reminded to be fearful every day.  Of course, the masks never protected the wearers or others from anything. They only served to increase illness, as individuals were forced to recirculate their own C02 and bacteria. But their main purpose was visual — a visual reminder to be very afraid, and to obey every government edict...for our “health,” they said.  Other draconian measures such as shutting down businesses and churches, cancelling public gatherings and celebrations, even closing public parks and beaches, were put into effect to impress upon us the supposed seriousness of the situation, and again — to keep us all fearful and compliant.

Then came the so-called “vaccine.”  Understand this: the so-called “vaccine” was not made for COVID.  COVID was made for the “vaccine.” In other words, COVID was simply a justification to get people so fearful and so compliant that they would readily line up to receive multiple injections of poisons. But not everyone was on board. Many were skeptical, especially when inexpensive treatments were readily available — but FORBIDDEN by the tyrants in power. Treatments like Ivermectin and HCQ, shown in thousands of peer-reviewed studies to cure COVID quickly and save lives.  But when anyone would so much as mention those words on social media, they were “flagged” as “false information,” and the people were banned. Doctors who had successfully treated thousands of patients with these medications were publicly smeared, their characters and careers destroyed, because they dared to tell the truth.

The same has happened to thousands of doctors and scientists worldwide when they have spoken the truth of the dangers of these injections. And make no mistake, the COVID so-called “vaccines” have only one purpose: to kill people.

VAERS data from the CDC itself shows that more than a half million people have suffered from severe side effects, including stroke, heart failure, blood clots, brain disorders, convulsions, seizures, Bells Palsy, inflammations of the brain and spinal cord, autoimmune diseases, miscarriage, infertility, deafness and blindness. In addition to these severe side effects, the CDC reports 16,000 people have died as a result of these injections. It should be noted that only between 1 and 10 percent of adverse reactions are ever reported to the VAERS system. Doctors are discouraged from doing so. And more than once, the CDC has scrubbed hundreds of thousands of cases, as they have “readjusted” the numbers the public can see on the VAERS system. You should also know that those who die within two weeks of receiving a jab are NOT considered to have died FROM the jab.

Especially concerning in these “adverse side effects” is how these jabs seem to directly and quickly affect the reproductive organs, rendering people sterile. Pregnant women who take the jab have frequently had miscarriages. No one knows if babies of injected women will be sterile their entire lives. This is all a dream-come-true for depopulation advocates like Bill Gates, but it’s a nightmare for the rest of the world.

You should also be aware that it’s not the “unvaccinated” that are causing the so-called “mutations” or “variants” of COVID — its the injections themselves, and scientists have shown conclusively that people who get the jab are the actual “super spreaders” of serious illness.

Friends, these injections are killing people. And people, trusting the government, health officials and media propaganda, are lining up to voluntarily get their “kill shots.” If somehow this is not stopped quickly, it’s now absolutely possible that we could see the world population reduced by 90% — just as the Luciferian Globalists decreed on the Georgia Guidestones 41 years ago.