Stay Away From Hospitals and Don't Get the Jab! 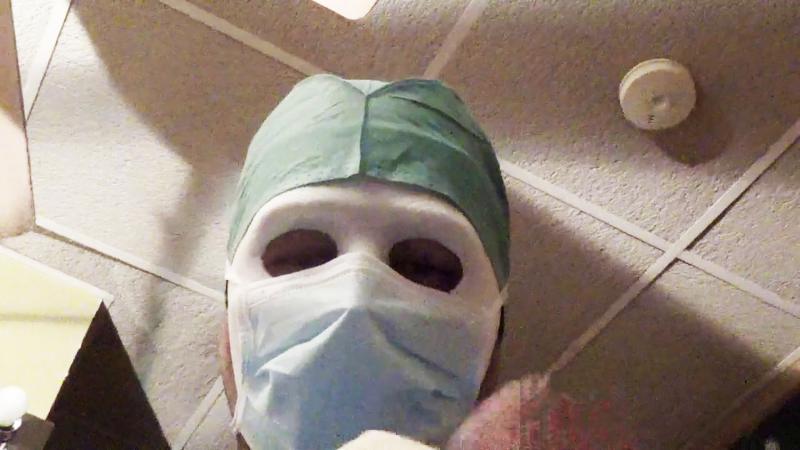 Complimentary Story
In my last message, I shared with you the Globalist plan for planetary genocide — mass depopulation of the Earth, which has long been the dream of people like Bill Gates, Anthony Fauci, Klous Schwab, and Luciferian “elites” throughout the world, in preparation for their “Great Reset” which has already been launched.

Their method is the COVID so-called “vaccines,” which in fact, are not vaccines at all, but experimental DNA- and RNA-altering poisons. I told you how — according the the CDC’s own VAERS data — more than a half million people in the US alone have suffered severe and terrible side effects, including strokes, heart failure, blood clots, brain disorders, convulsions, seizures, paralysis, Bells Palsy, inflammations of the brain and spinal cord, autoimmune diseases, miscarriage, infertility, deafness and blindness.  I also shared that in addition to these “side effects,” more than 16,000 people have “officially” died as a result of these injections.

Of course, we must remember, if a person dies within two weeks of receiving a shot, health officials claim those deaths are mere coincidence, and have nothing to do with the injections themselves.  We also know that these are simply the CDC’s “official” numbers and that only between 1 and 10 percent of all adverse side effects are ever reported to the VAERS system.  Moreover, the CDC has, more than once, scrubbed hundreds of thousands of cases as they have “readjusted” the numbers released to the public. If anyone out there still trusts ANY “data” or “numbers” released by the CDC on anything, they ought to have their head examined.

We should also remember that the effects of these injections are especially targeting the reproductive organs rendering people sterile for life.  Several scientists have also asked the question: what about babies born of mothers who took the jab? Since we know these shots seem to specifically target the reproductive organs, will these babies, too, be sterile for life? The answer is, we just don’t know.

By now you have undoubtedly heard about the ABC news station in Detroit that posted the following on Facebook: “After the vaccines were available to everyone, did you lose an unvaccinated loved one to COVID 19? If you’re willing to share your family’s story, please direct message us your contact information. We may reach out for a story we’re working on.”

This station, WXYZ, was seeking stories of “unvaccinated” people who died because they refused to take the jab. They received more than 250,000 responses to their Facebook post, but the responses were not what they were hoping for. Instead, all of the responses were from people who had severe horrific reactions to the jab, or loved ones who had died from the jab.  One person wrote: “I know people who died painfully from the vaccine.  Want those stories?”  Someone else posted: “I had an uncle and cousin die from the jab! My son-in-law’s aunt died from it and three more friends died from it.” And another person stated: “My dad flatlined after his second dose of Moderna.”  These are just a few of the comments. As I said, there were 250,000 more just like these, at last count. And this was a local Detroit news station.  Only God knows how many have died from the poison jab.

Personally, I had a long-time friend whose wife is a nurse and was required to get jabbed to keep her job. Shortly thereafter, my friend, her husband, just simply stopped breathing and died in bed next to her at 2 am. The cause of death was “undetermined” but we know those who have taken the jab are spreading some very weird illnesses to those they come in close contact with.  Another associate, in the prime of his life, at 38 years old, was one of the healthiest, strongest individuals I’ve known. He ran five miles every day, lifted weights, worked hard and had no medical issues whatsoever. But... he got the jab. One dose. And the next day he was dead, after a series of multiple strokes. These are just two stories of people that I can attest to personally.

Countless doctors, nurses, and other whistleblowers have shed even more light on the situation.  Hospitals are discouraging healthcare workers from reporting to the VAERS system, and they also follow a pre-prescribed protocol for those admitted to the hospital.  More about that later.

But understand this: it’s not the “unvaccinated” that are causing the mutations and “variants” that are making so many so sick right now.  The pestilence we’re seeing today is the result of those who have already taken one or more of the shots, as their bodies shed and spread the spike proteins the shots produce.

So what’s in these shots? It would be pretty difficult for anyone to continue to refute the fact that they most certainly contain Graphene Oxide. There have now been so many studies released by so many doctors, scientists and labs around the world showing that ALL the injections contain high levels of Graphene Oxide — some say up to 95% — that this is a fact that can no longer be hidden by the lying media. They still try. But the studies have been done — independently — and the data is in.

This alarming data has lead world experts, like the Nobel Prize Winner in Medicine, Dr. Luc Montagnier, to issue a grave warning that we are currently facing the greatest risk of worldwide genocide in the history of humanity.  Even the inventor of the mRNA technology, Dr. Robert Malone, warns against these injections. And former Pfizer vice president and chief scientist, Dr. Mike Yeadon, came forward to warn humanity against these extremely dangerous injections.

These and countless other doctors and scientists have found high levels of Graphene Oxide, as well as toxic nanometallic content with magnetic-toxic, cytotoxic and genotoxic effects as well as identified life-threatening parasites. These ingredients dramatically change blood cells and cause massive blood clotting, and they spread to every organ in the body.  There’s also “self-assembling” nanotech in some of the shots tested, while others show complex crystals being formed.  Not to mention the human genome is permanently modified.  In other words, these jabs forever change a person’s DNA.  An autopsy done on one vaccinated individual showed spike proteins in literally every organ of the person’s body.

There are trillions of dollars at stake here for Big Pharma and the hospital industry.  You may recall a recently leaked Zoom conference call between physicians and a marketing director at Novant Health New Hanover Regional Medical Center, which is a group of 20 hospitals and clinics treating patients in North and South Carolina. In the recording, Mary Rudyk, MD, tells Director of Marketing Carolyn Fisher and another hospital employee that she wanted to make the COVID situation “more scary to the public” by inflating the number of COVID patients, and by using messaging that falsely tells individuals, “If you don’t get vaccinated, you know you’re going to die.”

Meanwhile, Joe Biden has ordered all companies with 100 or more employees to force mandatory injections. The US military is mandated to get injected. Hospital and Nursing Home workers are mandated to get injected. Because, as Biden stated, “his patience is wearing thin” with those who reject the jabs.  Apparently, people aren’t dying fast enough for him and his handlers.  But interestingly, guess who’s NOT required to get jabbed? Of course, the US Congress and congressional staffers, the Judicial branch, the White House staff, CDC employees, FDA employees, Post Office employees, NIAID employees, Pfizer, Moderna and Johnson & Johnson employees, and illegal aliens.  Does that, in itself, not speak volumes as to what this is really all about?

Meanwhile, hospitals and nursing homes are doubling- and tripling-down on their jab mandates. Many are refusing any religious or medical exemptions from employees.  So now, across the country, there’s a mass exodus taking place among healthcare workers.  When faced with the choice between taking a proven deadly injection or losing their job, they’ve chosen to quit, or they’ve been fired.

But the hospital is NOT where you want to be anyway these days, no matter what.  Since they’ve been incentivized to list as many people as possible as “COVID positive,” if you go to the hospital, it’s very likely you’ll be declared “COVID positive.”  Then, their standard protocols begin.

From what I’ve learned from those with first-hand experience — and from some first hand experience of my own — if you go into a hospital with any type of upper respiratory problem, the one thing you will NOT receive is anything that will actually help you get healthy again.  Most doctors in the US have been forbidden to prescribe Ivermectin and Hydroxychloroquine — drugs that have been proven to be safer than aspirin, and have also been proven to be fast-working cures for COVID. These inexpensive, life-saving drugs have been all but banned in the US, and if do you manage to find a doctor willing to prescribe them for you, you’ll have a nearly impossible time finding a pharmacy that will fill your prescription.  Most pharmacies have corporate-wide policies in effect, stating that even with a doctor’s prescription, they will NOT fill orders for Ivermectin or HCQ.

If you go into a hospital with bacterial pneumonia, you’ll be told you don’t have “bacterial pneumonia,” you have “COVID pneumonia,” and you’ll be admitted. Once admitted to the hospital, even if your own family doctor has prescribed antibiotics for you, those will be immediately stopped and you’ll be started on the official “COVID protocol.”  This includes intravenous Remdesivir — a drug pushed by Fauci as the primary protocol once a COVID patient is admitted to the hospital.

But multiple doctors have stated that Remdesivir is actually a bio-weapon and extremely deadly.  It has a long list of adverse effects on the human body, the first of which is upper respiratory distress, quickly followed by kidney failure, followed by “cascading organ failure.” This causes the lungs to fill with fluid; then the patient is placed on a ventilator and suffocated to death.

There have been numerous reports from families with loved ones in hospitals who have essentially been medically “kidnapped.” The patients are not allowed to see their family members; family members are not allowed to have any input or authority over their loved one’s care, and patients are forbidden to have any access to other medicines.  If you attempt to get them discharged so you can care for them at home, you’ll be made to sign a form stating you’re doing so “Against Medical Advice,” and then warned that because you refused to follow medical advice, insurance won’t pay, medicare won’t pay, and you’ll not only have a dead loved one but be facing bankruptcy as well.

As I’ve done the research on this, in report after report after report, the hospital protocols seem to all be the same now, everywhere in America: 1) Pronounce the patient as COVID-positive, 2) cease any type of antibiotics or other medications, 3) immediately administer Remdesivir, 4) place the dying patient on a ventilator.  This may sound harsh and cruel, and it most definitely is. The families that have suffered through this scenario understand what I’m talking about.

Friends, DON’T take the jab — and stay out of the hospitals at all costs. Keep your immune system strong with regular supplementation of Vitamin C, Vitamin D3 with K2, Potassium Iodide, Zinc, N Acetyl Cysteine and Quercetin. You can still find these supplements available — get the best quality you can find. But don’t wait.  There’s already been talk of making these supplements available by prescription only, and you know, if it will advance the goals of the genocidal maniacs that are running things now, it may not be very long before that happens.