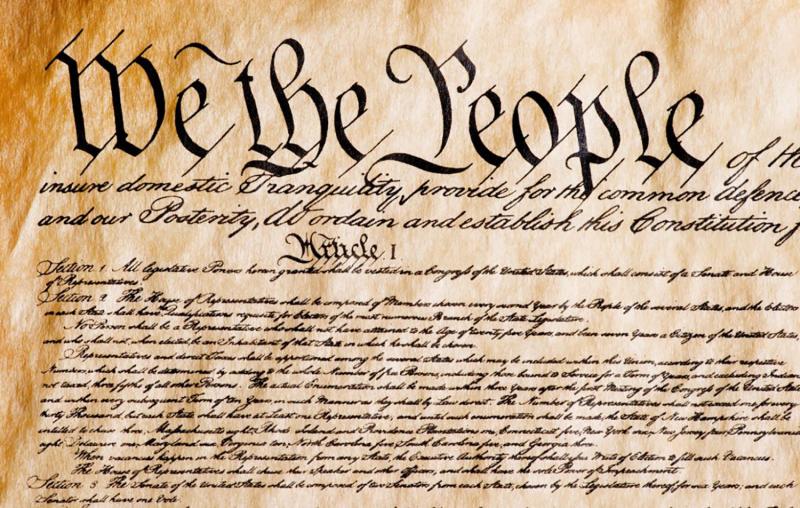 Complimentary Story
Leftists constantly attack us on the political right for “following an outdated document written by dead, white plantation owners over 200 years ago.” They act like our side is afraid of change and that we are stuck in the past.

No, here is why we want the Constitution followed by our elected officers, from county board members to sheriffs, to representatives up to presidents and Supreme Court justices, by everyone who took an oath to uphold and defend the U.S. Constitution.
9) We need to all be on the same page (parchment) so that American can long endure. Education is all.

Following the written Constitution ensures continuity and the consistent application and protection of our inalienable rights codified in the Bill of Rights over the span of generations. Each generation using the same source material to teach the next generation about our shared history (good and bad), the form of government we have and about the rule of law, checks and balances, civics and a common language and heritage. Then that generation comes of age and teaches the following generation the same way they were taught, and so on.

Leftists also understand the importance of teaching from the same source material, just that theirs isn't the U.S. Constitution, the Federalist Papers or other founding documents. Leftists want to control public education, and that is why they work tirelessly to get like-minded people on school boards. Leftists do all they can to separate parents from their children and teach children social justice and other socialist philosophies behind parents' backs. The younger they start indoctrinating them, the better.

Leftists know the WW II Generation, the Baby Boomers, and Generation X are set in our ways. We know about our rights and the role of government; they won’t change our minds. Leftists know that if they are successful, these future generations will grow up saying things like, “It’s OK to silence some speech like hate speech.” They will believe the purpose of government is to give people things and that sometimes violence is justified to correct social injustices and the party in power gets to do what they want “because that’s how democracy works.”

Even worse, some of the indoctrinated, fully socialized adults will be in positions of power, elected or unelected. In their ignorance, they will act on their beliefs, codifying them into new legislation and regulations “for the greater good,” and our Constitutional rights will be voted away within a few decades.

Lastly, if you don’t follow the Constitution’s original intent and both parties in power vote for unconstitutional programs and spending, no party can object and say, “You can’t do that. It’s unconstitutional.” In other words, hypocrisy, and people who live in glass houses.

If one man has been cheating on his wife for a while and he finds out that his best friend just started cheating on his wife, does the first man have any credibility to chastise his friend? If one worker starts taking a longer than allowed lunch break and the supervisor permits it, how can that supervisor then tell the other workers, “None of you can take a longer lunch break. It’s against company policy?”

Both major political parties have openly and repeatedly violated the Constitution and their oaths of office. Now We the People have no one in power who can say, “Your party can’t create that agency. That power isn’t permitted by Article 1, Section 8” or “This proposed legislation violates the Constitution. The federal government can’t force citizens to buy health insurance. Obamacare is illegal, Democrats.”

Now the other party can retort, “Oh, like when your party supported the Troubled Asset Relief Program to bail out private banks with taxpayer’s money? We don’t see that authority listed in Article 1, Section 8” and “Oh, like when George W. Bush signed ‘Leave No Child Behind?’ I thought you Republicans said the federal government shouldn’t be in education.”

Now I hear Congressmen and others on the right saying, “Thank God we have the filibuster in the Senate.” So, they are saying the filibuster is all that stands between our rights and the unconstitutional, lawless actions of power-hungry ambitious men the Founding Fathers would have revolted against in their day?

Remember in each presidential race when candidates from both parties exclaim, “We are one Supreme Court pick away from losing all our rights?”  If just one or two robed judges can vote our rights away, then checks and balances are gone, the Constitution is a dead letter, and our Constitutional Republic is over.

Andrew Zuelke is the State Chairman of the Constitution Party of Wisconsin. Learn more about us by requesting your free, no-obligation information packet today.