What Does It Mean To Be ‘In Christ?’ 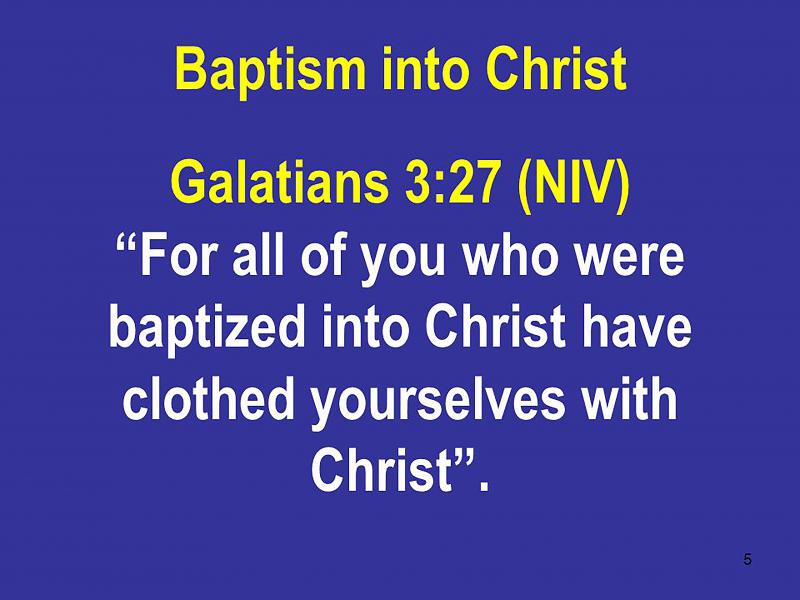 Complimentary Story
In last month’s article, I quoted Romans 8:1, “There is now no condemnation for those who are in Christ Jesus.”  I really like this thought.  Just think, if I am “in Christ” I am not condemned and I will be with Jesus for eternity when I leave this physical life.  But notice that I have high-lighted the word “if.” The word “if” makes being “in Christ” conditional.  We need to determine what those conditions are that put us into Christ.

Some may claim that since Titus 2:11 states, “…the grace of God that brings salvation has appeared to all men,” that we are therefore all in Christ simply because of God’s grace.  But Jesus, in Matthew chapter 7 tells us that road that leads to destruction is wide and many enter through it and only a few find the narrow road that leads to life.  In Matthew 7:22 He tells us, “Many will say to Me on that day, ‘Lord, Lord, did we not prophesy in Your name, and in Your name drive out demons and perform many miracles?  Then I will tell them plainly, I never knew you.  Away from me, you evil doers.’”

Let’s read a part of Romans 6:3-8, “Don’t you know that all of us who were baptized into Christ have been baptized into His death?  We are therefore buried with Him through baptism into His death in order that just as Christ was raised from the dead through the glory of the Father, we too may life a new life.  If we have been united with Him in his death, we will certainly also be united with Him in His resurrection.”

In past articles, I gave scriptural references to the fact that to be “in Christ” we also needed to have a faith (or trust) in Jesus such that we will confess Him as our Lord and also repent of our sins.  It is not only baptism that puts us into Christ, rather, obeying the Gospel (II Thessalonians 1:8) in its entirety which includes confession and repentance.  However, Romans 6 and numerous other Scriptures enumerated in past articles, proclaim the importance of baptism in our salvation.  Thus, I want to know what baptism is.  Therefore, let’s look at history and some definitions of baptism in Greek, Latin and German to see what it meant originally.  But before we do, in contemporary Christianity three forms of baptism are viewed as appropriate.  They are immersion, aspersion (sprinkling), and affusion (pouring).  Has this always been the case?

Let’s start by looking at what Martin Luther said in his original writing.  I’m not interested in what someone claims he said, I want to go back into his original material and read it for myself.  Luther’s written material has been combined into 55 very large volumes called “Luther’s Works.”  I will quote from volume 35 starting on page 29 of Luther’s Works: “Baptism [‘Die Taufe’ in German] is ‘baptismos’ in Greek and ‘mersio’ in Latin, and means to plunge something completely into the water, so that the water covers it.  Although in many places it is no longer customary to thrust the infant into the fount but only with the hand pour the baptismal water upon them from the fount, nevertheless, the former is what should be done.  It would be proper, according to the meaning of the word ‘Taufe’ that whoever is to be baptized, should be put in and sunk completely into the water and then drawn out again.”  Luther continues under point #2 on page 29: “Baptism is an external sign or token, which so separates us from all men not baptized that we are thereby known as people of Christ, our leader…”

You have just read what Martin Luther actually said about the meaning and significance of baptism.  It is obvious that Luther felt that baptism is essential in the salvation process.  It is also obvious what he believes the appropriate form of baptism is based on the definition of the original Greek word and then the equivalent meaning in Latin and German.

I remember the first time I read what Luther said.  It took my breath away. Why? Because I immediately asked myself: “Based on what I have just read, have I really been baptized?”  According to Luther’s explanation of baptism, at that point in time I had not.

Since I speak and read some German, let me write in German something that Luther said in his material called: “The Babylonian Captivity of the Church.”  Here is Luther: “Ich konnte mir wunschen, dass die getauften ganz untergetaucht werden, der bedeutung des wortes entspechend.”  You will have to wait until next month for the translation.

Next month we will examine the Catholic encyclopedia in regard to its definition of baptism (I guarantee a surprise).  We will also look at the actual Greek along with a great deal of additional history.

Ed Nill is the author of the book: “Christianity – Why I Believe What I Believe – Why Do You Believe What You Believe?”  See www.bosspublishing.org for ordering information.  When you purchase the book, if you specify in the comment section that you would like a full PDF copy of Luther on baptism, I will email it to you at no cost.