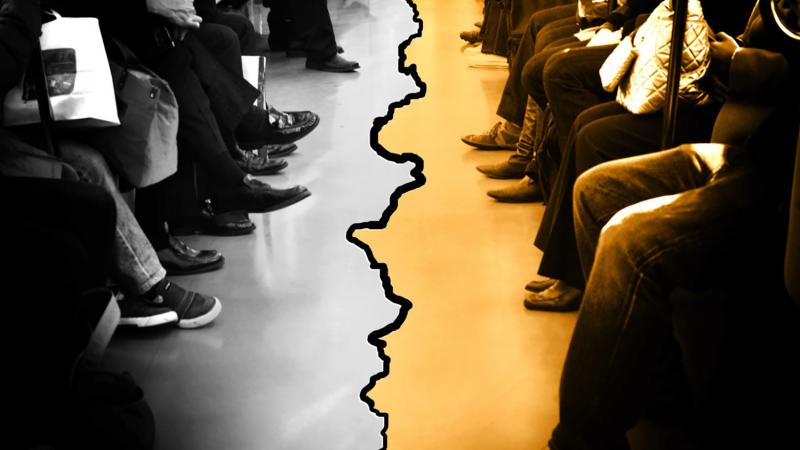 Complimentary Story
America’s nationhood doesn’t depend on a common ancestry or race, or on common economic circumstances, or even on common political views.   Instead, the real ties that bind are common values – values that are based on common faith in a transcendent God.   That was the fundamental unity of America envisioned by the founders.   But for the last several decades, Leftist elites have been hacking away at this solid underpinning, trying to divide us into hostile identity groups that are too busy fighting each other to notice the country’s gradual descent into chaos.

Lately, elites have been openly assigning various tribal labels to the rest of us – so you might want to keep track of which tribes you’ve been “assigned to.”   For example, are you in the person-of-color tribe?   Or, alternatively, are you a white supremacist?   If you’re white, you’re one of the latter no matter what – and even if you’re a person of color, you might still be a white supremacist (just ask Larry Elder or Condi Rice).

Are you a victim of someone or something that, among other things, makes you unmotivated for work and thereby in need of government support?   Or are you one of those selfish oppressors who has the audacity to want to keep most of what you earn?   If the latter, you clearly need “re-education” to understand the damage you’re inflicting on others by not offering all for the common good.

Are you a member of the save-the-planet tribe – you know, the guys with the white hats who recognize that the science is settled (because NPR said so), and that the use of fossil fuels is behind all those weather changes and must be eliminated?   Or are you one of those narrow-minded black-hatted science deniers who insists on asking questions and sees no need to sacrifice your home heating system, stop driving your toxic non-electric car, and refrain from using other resources God has provided?

Are you a member of the tribe that places “social justice” front and center – particularly the objective of equality of result for all (except elites, of course) – or are you one of those Trumpist deplorables who still believes America is a meritocracy?

Finally, are you in the “woke” tribe that recognizes the ever-increasing variety of genders and sexual preferences that exist in our society – or do you belong to the tribe that clings to the discriminatory Christian view that there are only male and female?

The above dichotomies are a few examples of what “progressives” have worked on for decades and now seem to be achieving – slotting Americans into various good-guy and bad-guy tribes and playing them off against each other – i.e., dividing us by false unities.   And in the true spirit of good-is-evil and evil-is-good, practicing Christians are invariably slotted into the bad-guy groups.

But as implied in the first paragraph, division in America is not always negative.   The fact is, America has always been a divided nation in many ways and was not meant to be otherwise – as evidenced by the federalism wisely built into the US Constitution.   In that document, the founders created a strictly limited central government with a few specified powers relating to common defense, a common currency, basic rules for interstate commerce, patents, copyrights, etc.   All other powers not specifically granted to the central government were to be held by the states to be codified and exercised within their own jurisdictions and according to their own (typically differing) needs.

The founders understood that the key elements of American unity were primarily intangible and were granted not by any government or document, but by the God of Heaven.   These are what we call the natural or inalienable rights referred to in the Declaration and Constitution, and spelled out in the Bill of Rights.   They’re rights that are granted by God, and government is supposed to protect them and not whittle them away – but most of our leaders today and far too many rank-and-file Americans are denying or ignoring God and playing fast and loose with the freedoms He has granted.

On a practical level, the founders set things up that way precisely because the states then were different in many significant ways, as they continue to be today.   Is there any doubt that people in Miami, Florida have needs, wants, and interests that are widely divergent from people in Caribou, Maine?   And the same can be said for people who live in LA or Atlanta versus those who live in Iowa or Idaho.   There are wide divergences even within most states, such as between New York City and upstate New York.

This is why government central planning of economics and of life in general has never worked here or anywhere else.   For example, it’s why Washington DC’s Common Core for all schools was a monumental bust (the curriculum was heavily flawed), and why the No Child Left Behind program still bleeds money without measurable results.   It’s why many promising innovative business startups have been regulated out of existence by politicians and government bureaucrats, who – as pundit Laura Hollis says – are “economic idiots” (Townhall, 10/21/21).   Government meddling is also why health care costs have, for decades, far outpaced inflation.   And most of us are aware of a number of boondoggles relating to government’s embrace of the climate change hoax.

Can there be any real unity in today’s America?   The most fundamental unity – the unity that once provided a solid foundation for the country – is unity of faith in God.   It’s a fact that the great majority of the founders and colonists were unified in true Christian faith, and the result was that our country became strong and remained so for many years.   That’s because the great majority also embraced other key values, all derived from Biblical faith – freedom (worship, speech, etc.), marriage and family, morality, charity, a solid work ethic, individual choice and responsibility, and so on.

But starting mostly in the 1950s, these values weakened at an ever-increasing pace, primarily because their foundation of faith was being attacked on several fronts – the halls of government, local schoolrooms, academia in general, and even in the private business sector.   And when a structure’s foundation weakens, other parts of the structure (values) do likewise.   As we’re seeing, things disintegrate into our current tribalism – an assortment of new and false unities that war on each other.   Divide and conquer.

Lately, though, righteous resistance to some of these man-made tribal face-offs is visibly building.   One example that’s loud and clear involves the vaccine – more specifically, the vaccine mandates.   There are plenty of data, now, that support the wisdom of questioning this experimental therapy and at least keeping it optional – e.g., the fact that the vaccinated comprise a near-majority of new COVID cases.    The protests are mounting, but as you’d expect, the Leftist response is to double down on mandates.   Scott Masson, a writer for the Epoch Times, sums up the situation with some humor:

Another example of righteous pushback in the tribal wars is by a growing number of parents all around the country who are loudly protesting the indoctrination of their children by government schools with false and destructive dogma like Critical Race Theory and the transgender fad.   In the process, parents are also noticing their kids are deficient in reading, writing, and math – and that’s why homeschooling is on the upswing (now 11.1% of households) and there’s renewed demand for non-union charter schools.

These battles need to be fought, but to win the overall war, many more patriots need to unite around Jesus – i.e., a great awakening – because in so doing, we unite around a Truth that demolishes all the false tribal unities being thrust upon us.   As Paul warns: “…we [must] all attain to the unity of faith and the knowledge of the Son of God, to mature manhood…so that we may no longer be children, tossed to and fro by the waves and carried about by every wind of doctrine, by human cunning, by craftiness in deceitful schemes.” (Ephesians 4:13-14).