How Christianity Lost the Savor 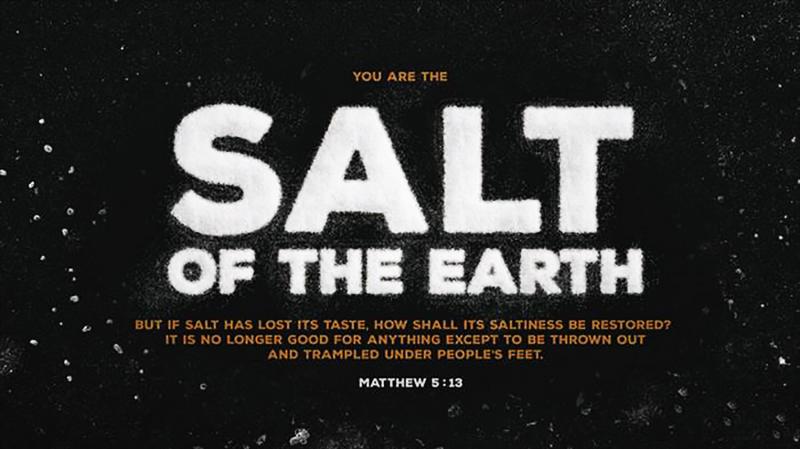 Complimentary Story
Sometimes I think that maybe no one is listening…but I know that isn’t true. More likely, they are hearing, but they are not moving. Goliath is big, and most Christians have no stones to sling. Truth is the stone they can sling…they just don’t know it.  Not political truth…not the kind that “the truth detector” espouses three-hours a day on AM radio…but real Truth…life altering Truth…simplistic Truth that can change the world.

But real Truth doesn’t sell. In fact, it usually hurts. But nothing sets one free as much as knowing the Truth. Jesus is THE TRUTH. He is more than a Savior…more than a name on a coin…more than someone in whom “we trust.” Jesus is the incarnation of The Truth. Apart from Him, everything else is an opinion…a mere shadow of Truth. Truth is not an opinion. Truth is a person. But most Americans, as Jack Nicholson famously said, “...can’t handle the Truth.”

“I’m OK, You’re Ok,” was a best-selling book published in the ‘60s. It was the first of a genre  of “self-help” books that sold millions of copies. Those psycho-babble books paved the way for humanism’s stealth-emergence as the religion of the 21st century. Like most counterfeits, it looked authentic, and probably did help folks make it through their daily lives. But it was and is a lie. I’m not OK…and neither are you. Until we deal with that Truth, America and Americans will continue to spiral down to a modern-day version of The Planet of the Apes.

This feel-good theology was popularized by Norman Vincent Peale (“The Power of Positive Thinking”), and handed off to Pseudo-Christians Zig Ziglar (“See You at the Top”) and Robert Schuller (“Move Ahead With Possibility Thinking”). This deadly witches’-brew of Humanistic - Christianity created the wave for Author/Mega-Pastors like Rick Warren (“The Purpose Driven Life”), and Joel Osteen (“Your Best Life Now”) to present a sugar-coated, watered-down, sin-free version of the Gospel.

Ask yourself this. Why is it that CNN loves to give Osteen so much face time? Could it be that the media is doing their best to present to most Biblically-challenged Americans the lie that the “gospel of Rodney King” (“Why can’t we all just get along”) is the true version of Christianity? Could it be that CNN wants to erode and pacify “Christians” by presenting Pastor Glitter Teeth as the establishment-approved who-am-I-to-judge spokesman for the religiously-weak?

Give me an hour in front of Piers Morgan. I’ll rattle their cages. Have you ever seen a “combative” Christian appear on ANY national TV show? Where is the Christian version of James Carville? Where are the Christian truth-bomb throwers willing to fight for our side?

Please understand the deception. Jesus is not a tolerant, go-along to get-along, “I’m Ok you’re Ok,” “if it feels good do it,” “come-sit-on-my-lap,” passive Savior. A rude awakening awaits many that subscribe to this thinking.

Jesus overcame death, hell, and the grave. He is a conquering King who will return and in righteousness He does judge and make war. He will not share His power, authority, or glory with another. You can take that fact to the bank. That, my friends is the Truth.

Why are Christians too intimidated to declare it? Why do we allow so many lies to go unchallenged?

1). Islam is NOT a peaceful religion although some Muslims may be peaceful. Muslims and Christians do not serve the same God. Islam teaches “submit or die;” Jesus teaches submit and live.

2). It is not anti-Semitic to criticize Jews. Some Jews are very bad people who hate Jesus. No better authority than the Apostle Paul warned us that not all Israel, are of Israel (Romans 9:6-7). John, in the Book of Revelation wrote “...which say they are Jews, and are not, but do lie.”  (Revelation 3:9).  Why is it considered anti-Semitic to point out that the entertainment/media conglomerates are controlled by adherents to Judaism? Is speaking the Truth racist?

3).  Negroes are no more African-American than I am European-American. Most have never set foot outside the good ole USA. Why is “black-pride” good but white-pride racist? And there are many caucasians that are also African-American.

5). All voters are “values” voters; it is what they value that makes all the difference. Negroes vote their skin color over Christianity. Obama was the most pro-abortion president in history. Over 95% of Negroes voted for him. Abortion is murder! Christian-blacks voted for murder.

6). Most pastors are hirelings. They are ineffective outside the security of their four walls. NOTHING has destroyed American values more than government schools, yet not one pastor in a thousand will speak out against government’s schools. The average pastor makes $80,000; not a bad gig. No wonder they won’t rock the government’s boat. Best life Now, anyone?

7).  Liberalism requires no thinking. It is as natural as breathing air. A Harvard professor and a Junior High School student both think alike. Christianity requires thought. It teaches that seeing is not necessary for believing and that believing does not require seeing. Atheism believes in nothing. Macro-evolution is faith with nothing at the beginning. Believing in nothing is impossible.

8). America is in a fiscal freefall because we are in a moral freefall. We went over the moral cliff before we went over the fiscal cliff. Spending more than you have is a moral issue, not a fiscal one. My Dad would never have left his bills to his grand kids as Congress has done to us.

9). Can you name any other living creature our government has made legal to kill other than an unborn baby? A puppy? A Deer? A Spotted Owl? A Snail-Darter? At least for animals you need a permit. Women’s liberation movements have created promiscuous women and irresponsible men. The unborn are the poker-chips in this Devil’s wager.

Ultimately, the cultural war is a moral war. It is morality that defines a culture. Changing the morality changes the cultural. Multi-culturalism has done to America what AIDS does to the human body. There is no American culture anymore. Christian morality is the only protection against cultural AIDS. Humanism is to Christianity what kryptonite is to Superman.

Have you noticed they are sandblasting the Ten Commandments off buildings and replacing them with nothing? Fighting is not evil. Not fighting evil is evil. Godly men have abandoned the field in the battle for Truth. Evil rules when evil men make the rules.

Conservatism is a salt substitute. Conservatism makes salt taste sweet. Conservatism does to Christianity what aspartame does to Diet Coke. Aspartame is a poison that is 200 times sweeter than sugar. A little dab will do ya…it makes the medicine go down…disguises the natural taste of things.

“The salt has lost it’s savor…most Christians are good for nothing," (paraphrase of Matthew 5:13).