What Does it Mean to be ‘Double Minded?’ 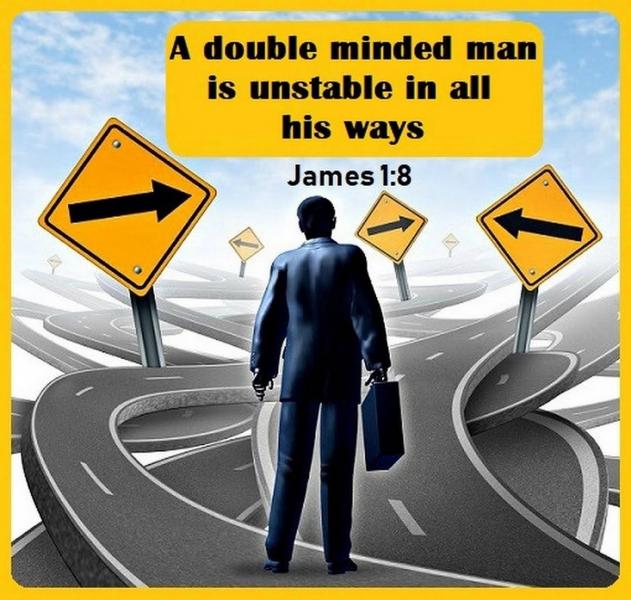 Complimentary Story
“Double-mindedness” could be described as the person who says one thing and then does the opposite.  They cannot be trusted, not unlike the society we live in today. Today we refer to them as being “two-faced.”  We find the words “double minded” exclusively in the book of James. It comes from the Greek word “dipsuchos,” which means “a person with two minds or two souls.”  Some Bible theologions believe that James might have acually coined this word himself. To really understand this word, we need to consider how it is used in the Scriptures.

In James 1:6–8, James describes a doubting person “like a wave of the sea, blown and tossed by the wind. That man should not think he will receive anything from the Lord; he is a double-minded man, unstable in all he does.”  One who doubts is a double-minded person. In Matthew 6:24, Jesus described such a person as one who tries to serve two masters — they are  unsteady, wavering in both their character and their feelings. A double-minded person is often confused in their thoughts, actions, and their behavior, literally being at war with themselves.  They cannot fully give themselves to God; wanting God but letting themselves be pulled into the world and it’s many desires. We could describe them like a drunken man unable to walk a straight line, swaying one way, then the other way. They are “unstable in all they do.” Those who are double-minded will not have the faith described in Hebrews 11:1, 3, “Now faith is the substance of things hoped for, the evidence of things not seen... For by it the elders obtained a good report... Through faith we understand that the worlds were framed by the word of God, so that things which are seen were not made of things which do appear.”

A person cannot be both “committed” and “doubting” at the same time as is a double-minded person. One part of their mind is positive.....while the other part is negative. How many reading this today remember the “pushmi-pullyu” creature described in the Dr. Doolittle stories?  It was an animal with a head at either end of its body and was constantly trying to walk in two different directions at the same time. That is another way to look at the life of a double-minded person.

Matthew 6:24 tells us that God and the things of the world are opposites in nature and it is impossible to love one without hating the other. If someone struggles with double-mindedness, it would be helpful to read Bible passages that strengthen our faith as in  Romans 10:17.  And pray for faith and strength.  God freely gives good things to those who ask Him as we are reminded in Luke 11:9-12, Luke 17:5 and Mark 9:24.