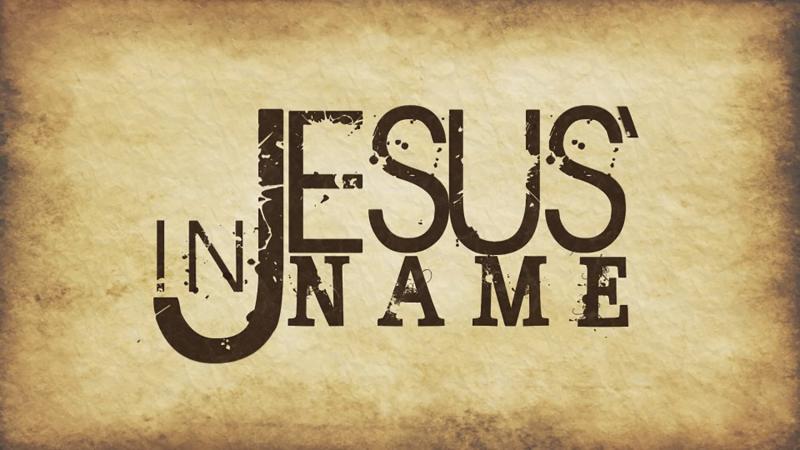 Complimentary Story
In the previous three articles, we listed some attributes of Allah, the god who WAS, which means he is a changeable god.  However, when we talk about the God of the Bible, He is the unchangeable God, and that is why the Bible speaks of God as He IS, not WAS. We also gave some examples to show the opposite natures of the God of the Bible and Allah of the Qur’an. Then we gave some prophecies that were fulfilled about the when, the where, and the how of Jesus’ birth. In this article we will look at what His name is and why He came.

Muslims claim they believe in Jesus as they emphasize that He was a good man, a good teacher, and a good prophet. They actually state that the name of Jesus is mentioned in the Qur’an more than Mohammed’s name. Some of our famous “conservative” preachers like Rick Warren who prayed at the 2009 inauguration of Mr. Barack Hussein Obama ended his prayer by saying “in ‘Isā’s name.”  When Rick Warren was asked why he chose to pray in that name, he answered that it is the name of Jesus in the Arabic language. I call such people “useful idiots” because had they simply Googled the Arabic Bible, they would have found that the real name for Jesus in the Arabic language is Yesua  which is the translation of the name Jesus in the Hebrew language which is Yeshua.

What is breaking my heart is not the ignorance of such famous preachers but the influence of Muslims on Christians. Now in some of the new translations of the Bible, our foolish translators at the Wycliff Bible Society are using the name ‘Isā instead of Yesua, and if you ask why they are doing this, their foolish answer is because Muslims are more familiar with the name ‘Isā than with the name Yesua. However, if you dig deeper into their translation, you will discover that they also changed the words “Son of God” to “the prophet of God” or “the messenger of God.” If you ask why these changes were made, they will tell you it is because we do not want to offend the Muslim people and we try to lead them to Jesus by using these terms. What an evil act!

The name Yesua in the Arabic language is the only accurate name for Jesus when you translate from the Hebrew language, which means “Jehovah is salvation” or “Jehovah, the Savior.” In Matthew 1:21 we read:  “And she shall bring forth a Son, and thou shalt call His name JESUS: for He shall save His people from their sins.”

What about the name ‘Isā? What does this name mean? The answer is very simple. This name was put in the Qur’an by Mohammed simply to deny the deity and the work of Christ, for ‘Isā has no meaning in the Arabic language, which means Jesus came and left without any purpose, we do not know who He was, or why He came.

Did Joseph obey the command of the angel, and did he name the son of the virgin Mary exactly as the angel said? That is what we read in Matthew 1:24-25: “Then Joseph, being raised from sleep, did as the angel of the Lord had bidden him, and took unto him his wife: And knew her not ‘til she had brought forth her firstborn son: and he called His name JESUS.”

Muslims deny the work of the Savior Yesua, but if we examine the Old Testament, we see the prophecy was written in very clear words that Jesus (Savior) must save us from our sins. Not only because Angel Gabriel said to Joseph in Matthew 1:21: “And she shall bring forth a Son, and thou shalt call His name JESUS: for He shall save His people from their sins,” or to Mary in Luke 1:31: “And, behold, thou shalt conceive in thy womb, and bring forth a Son, and shalt call His name JESUS,” but because many other prophecies written hundreds of years earlier in the Old Testament.

Approximately 1000 years before Christ came in the flesh, we read about His death on the cross in Psalm 22:1: “My God, my God, why hast thou forsaken Me?  Why art Thou so far from helping Me, and from the words of My roaring?”  Many theologians interpret this to say that Jesus was crying out to God, but I disagree, for if Jesus was praying to the Father, He would have used His own words. However, here we read Jesus using the words of David, word for word, as if Jesus is catching the attention of those who were at the foot of the cross to the prophecy which was written in Psalm 22. We have to understand that at the time of Jesus, there were no numbers for the Psalms as every chapter was known by the first portion of words. So if I want you to read Psalm 23, I would simply tell you to read “the Lord is my shepherd.” Here we see Jesus is about to give up His spirit. He did not read the entire psalm of “My God, my God, why has Thou forsaken Me.” He simply pointed to that psalm for the Jews there and for us here as this prophecy continues in Psalm 22: 16-18:  “For dogs have compassed Me: the assembly of the wicked have enclosed Me: they pierced My hands and My feet. I may tell all My bones: they look and stare upon Me. They part my garments among them, and cast lots upon My vesture.” As we examine the account of the crucifixion of our Lord, we see in the Gospels the fulfillment of this prophecy of David. We encourage you to read Matthew 27, Mark 16, Luke 23, and John 19.

Another prophet who prophesied about the death of our Lord is Isaiah. For example, in Isaiah 53:3-7, he refers to Christ as: “He is despised and rejected of men; a man of sorrows, and acquainted with grief: and we hid as it were our faces from Him; He was despised, and we esteemed Him not. Surely He hath borne our griefs, and carried our sorrows: yet we did esteem Him stricken, smitten of God, and afflicted. But He was wounded for our transgressions, He was bruised for our iniquities: the chastisement of our peace was upon Him; and with His stripes we are healed. All we like sheep have gone astray; we have turned every one to His own way; and the LORD hath laid on Him the iniquity of us all. He was oppressed, and He was afflicted, yet he opened not his mouth: He is brought as a lamb to the slaughter, and as a sheep before her shearers is dumb, so he openeth not His mouth.” This was written 700 years before Christ came in the flesh.

Amazingly, when Jesus was judged before the high priest, the Pharisees, Pilot, or Herod, He never defended Himself, not in words or in actions. It would have been very easy for Jesus to call on the angels from Heaven and go to war against all those who desired to crucify Him. He would have easily won the battle, but then the prophecy would not have been fulfilled and we would not have been saved. Salvation could not have been accomplished unless the rest of the prophecies were fulfilled, for a dead Savior could not save sinful men. That is why we read in the Old and New Testaments the prophecies about the risen Lord.

For example, we read of the prophecy of Christ’s resurrection in Psalm 16:10: “For thou wilt not leave My soul in hell; neither wilt thou suffer thine Holy One to see corruption.” Jesus Himself repeated the prophecy in John 2:19-22: “Jesus answered and said unto them, Destroy this temple, and in three days I will raise it up. Then said the Jews, Forty and six years was this temple in building, and wilt thou rear it up in three days? But He spake of the temple of His body. When therefore He was risen from the dead, His disciples remembered that He had said this unto them; and they believed the Scripture, and the word which Jesus had said.”

The name Jesus, Yesua in the Arabic language, could not be fulfilled unless He died on the cross and rose from the dead as it is written in the Scripture. However, somehow Muslims missed it simply because they believed the lies Mohammed wrote in the Qur’an by calling our Savior ‘Isa, not Yesua. The God of the Bible knew what is coming in the life of His Son. That is why He gave the prophecies in the Old Testament and all were fulfilled in the New Testament. That is why the God of the Bible IS, not WAS.