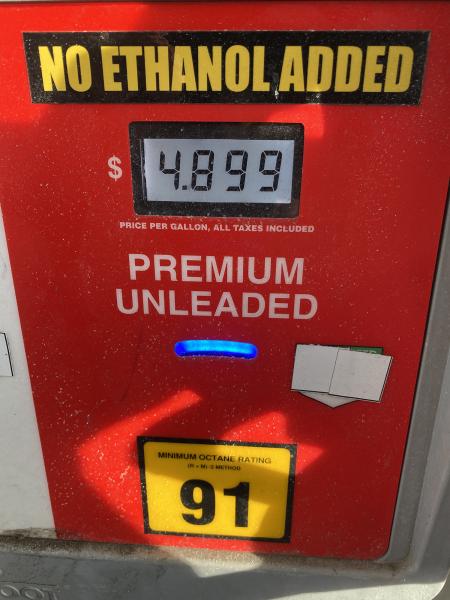 
It's hard to believe that just 2 years ago America was energy independent and a net EXPORTER of oil for the first time in 70 years.  Now, due to the disastrous energy policies of the Biden administration, people have seen unsustainable, budget-busting gas and heating prices.  Biden recently said that he “Can’t do much right now.  Russia’s responsible.”

Well, Biden, gas prices started to rise the day after your inauguration and were up $1 per gallon in the first 13 months of your term.  Whose fault is that?  How about a few simple facts.  We are pumping 1.5 million barrels a day LESS than December 2019.  According to the Baker Hughes website, the rig count in December 2018 was 1078 and in March 2022 it is 650 (rig counts are published on the first of the month).

Contrary to the incompetent person in the White House, there are numerous solutions to the current energy crisis.  Here are a few suggestions:

1).  Withdraw from the Paris Agreement.  This one-sided agreement, while doing little to cut carbon emissions or other purported causes of “climate change,” is projected to add an extra $30,000 in energy costs for the average American family of 4 over the next 10 years.

2).  Approve the Keystone XL Pipeline and protect the Michigan Pipeline, which transports more than 500,000 barrels of oil every day.  If the Keystone XL would not have been cancelled on his first day in office, it would be transporting oil right now.
3).  Renew oil and natural gas leases on federal land which you revoked shortly after taking office.

4). Reopen the Arctic national Wildlife Refuge in Alaska.  Alaska is awash in oil and can provide all the oil the US uses.

5).  Cut back burdensome energy regulations, which is a strategy to promote “divestment” throughout the U.S. energy industry.

6).  Stop imposing tax hikes on energy companies, which is designed as a punitive measure one would expect to see from authoritarian governments in 3rd world countries.

To all the “climate change” alarmists, we are an oil-based economy and will be for a long time.  Alternative energy methods are not even close to prime time.  And if your answer is electric vehicles, where do you think we will get energy to produce the electricity to run those vehicles?  Compared to other countries, the U.S. produces energy with much less (if any) pollution and supports AMERICAN workers, not dictators in other countries. Getting oil from Venezuela and Iran, really?

American citizens are being held hostage by a bunch of lunatics in the federal government who have declared war on the American economy.  If Biden does not revert back to a pro-American energy policy, the consequences — for American workers, the American economy and America’s national security — will be nothing short of catastrophic.