We Can't Just Look the Other Way Anymore 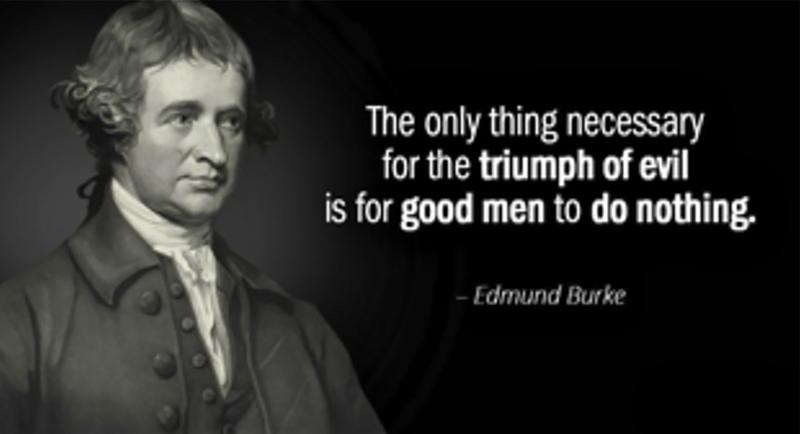 “The only thing necessary for the triumph of evil is for good men to do nothing.”    -Edmund Burke

The quote above has been mentioned many times in many different contexts. It is part of a longer letter that Burke wrote to his friend, Thomas Mercer, in 1770. The entire thought that Burke sought to express is a powerful reminder of the evil that will befall any people who fail to swiftly and with much malice, destroy the evil actions of those who would by those actions enslave a free people in tyranny. Burke said:

“Whilst men are linked together, they easily and speedily communicate the alarm of any evil design. They are enabled to fathom it with common counsel, and to oppose it with united strength. Whereas, when they lie dispersed, without concert, order, or discipline, communication is uncertain, counsel difficult, and resistance impracticable. Where men are not acquainted with each other’s principles, nor experienced in each other’s talents, nor at all practiced in their mutual habitudes and dispositions by joint efforts in business; no personal confidence, no friendship, no common interest, subsisting among them; it is evidently impossible that they can act a public part with uniformity, perseverance, or efficacy. In a connection, the most inconsiderable man, by adding to the weight of the whole, has his value, and his use; out of it, the greatest talents are wholly unserviceable to the public. No man, who is not inflamed by vain-glory into enthusiasm, can flatter himself that his single, unsupported, desultory, unsystematic endeavors, are of power to defeat the subtle designs and united cabals of ambitious citizens. When bad men combine, the good must associate; else they will fall, one by one, an unpitied sacrifice in a contemptible struggle.”

I have thought often lately, about the necessity of good men taking action when evil men seek to wrest power and control from them. We are in a period of time in America in which good men have not stood toe to toe with evil men and steadfastly refused to comply. Instead, evil has run roughshod over Americans for decades and has become an emboldened giant our land. This giant has become so arrogant that it sneers at Christians, taunts us, mocks us, and dares us to step onto the field of battle do something about what it has forced upon us.

Some might argue that many good men have pushed back. They might point to organizations that appear to have done much good such as The Family Research Council, Focus on the Family, the American Family Association and others. Each of these organizations has certainly done some good things. One thing is lacking however: they have not called for nor led their followers and donors to activism. By activism, I am not speaking of letter writing campaigns, and I do not mean calling elected officials. I am not even speaking about participating in an annual “march” in the city of your choice. What I am speaking of is becoming what the evildoers in our midst call a “right-wing extremist.”

If that last statement caused you concern and your first thought was, “well I’m not a right-wing extremist and I don’t think we should be,” then you are part of the problem Burke was speaking about in the quotation above.

Let me explain what has happened to you. The evildoers that believe they are in an unassailable position of power in America have redefined righteousness and holy indignation that leads to action as “extremism.”  Do you understand that dear reader? The Progressive, Leftist, Marxists that have high-jacked our political system, and I mean all parties have been high-jacked, have redefined godly behavior as extremism, and Christians who are to be the salt and light of the world have accepted this definition and turned their backs on the battlefield.

Salt that has lost its savor is good for nothing but to be cast down and trampled underfoot.  Does that not describe much of the modern Church in America?  Christians, who are to wear the armor of God as day to day attire so as to be ready for every battle,  have refused to put on the armor of Him whom they proclaim to love and serve, and they refuse to do battle with evildoers. That this is true, is evidenced by the whimpering responses of so many who have accepted defeat, have shrugged their shoulders, and have proclaimed by their inaction that there is nothing that can be done to stymy evil’s advance in our land.

This behavior from the sons and daughters of God is heartbreaking. Burke said when men are linked together, when we understand the forces arrayed against our God and therefore against us, we are equipped to oppose it with united strength. The Apostle Paul described our mission statement this way:

“We are destroying speculations and every lofty thing raised up against the knowledge of God, and we are taking every thought captive to the obedience of Christ, and we are ready to punish all disobedience, whenever your obedience is complete.”

In other words, there is a way of life that Christians are called to live, equipped from God’s armory with every weapon necessary to overcome first, our own frailties and second, the strongholds in our lives and those established in the lives of others. Christianity then becomes a rescue mission that strikes at the very gates of hell utilizing supernatural weapons of divine craftsmanship. But, there is something more to know about what God equips His sons and daughters with.

Of this weaponry Alan Redpath reminds us:

“It is not armor to protect the body, for it is not designed to keep the Christian from physical harm, but it is armor designed to protect him from all spiritual attack. It is not something with which he clothes his body, but something with which he clothes his soul. It is hidden from the outward scrutiny of others, but its existence in the realm of a man’s soul will be revealed in his daily life.”

There is an issue that must be addressed, friends.  Paul’s last statement in his second letter to the Corinthians cited above, points a finger at the problem: carnality in the body. Paul said, “And we are ready to punish all disobedience, whenever your obedience is complete.” The body of Christ is weak, disoriented, and ineffective because carnality reigns. The salt is not savory when carnality is present.

How has this happened?  It has happened because the Church has been infiltrated and Christians have become convinced that churches are to be safe houses for all. Let me be clear about something. The Church should be a field hospital that bandages up the wounded and cares for people during recovery. But, we are not to be putting bandages on festering wounds, allowing gangrene to eat away at the flesh, and pretend like we are loving people like Jesus did.  Allowing people to remain in their sin because we think that is “loving them” is apostasy from the truth of the Scriptures writ large. Instead, when God divinely leads people to you, you are to take out your medicine bag which is the Word of God, and write them a prescription that will begin to address the disease of sin. Christians are to prescribe spiritual medication written by the Holy Spirit of God that provides the only healing available.

For the Church to be the Church once again, it must recognize several things.  First, the Church must accept that America has been sabotaged from the inside out. That this sabotage has happened within the Church and has spread to our shared civic life is clear. The Church reflects the culture to its shame.

Second, the mission wherever the Church is found is to share the Gospel of salvation through faith in Christ alone and to denounce wickedness. Christians have been mesmerized by cliche’s and psycho-babble nonsense when it comes to denouncing evil. One example of this is the common refrain I hear from pastors: “we want to be known for what we are for, not what we are against.”  When you hear that, you are listening to a coward or someone who is simply ignorant of the message of the Bible.  Either way, I encourage you to keep your time short with fools.

Finally, the Church must begin to hold its services in the streets.  Some of you are thinking through the implications of that statement right now.  What I am stating is that worship, ministry, service, and obedience should happen much more often OUTSIDE the walls of our buildings.  Our “church services” should be about equipping one another to do ministry and ministry happens in the streets more than inside the walls of the building you meet in.  It is the world of people drowning in darkness that needs the ministry of God’s Holy Spirit empowered children.

I know of a group of Christians who have named their church, “The Church at Planned Parenthood.”  You guessed it, they meet together at a local Planned Parenthood to pray, sing, and testify that God can redeem people. They incorporate those things into their mission to try to persuade those who are about to destroy innocent life, to consider another option. They speak of God’s holiness but they also point out the wickedness that is abortion of unborn children.

Now, make no mistake, persecution is the result of an obedient life lived for the glory of God.  We are sheep among wolves, but not ordinary defenseless sheep.  We are to be shrewd sheep that understand the ways of the world and how we are to combat evil.  The point that I want you to understand, reader, is that when you are humbled before God, He will send you on mission for Him. That mission will be to those who are perishing. You will find some whom God has made ready to receive His mercy. You will find others who have become hardened in their sin and who reject you in the vilest of terms. Press on anyway.

Friends, we can no longer look the other way and expect SOMEONE ELSE to get America back on the right path. We are fighting a cabal of evil. There are myriad people and organizations which are deliberately attempting to destroy America. They are well organized (AND FUNDED) and they will not stop until they have turned America into a churning cesspool that envelops us all.

No President, Congress, billionaire, or corporation made by man is capable of winning this battle for the continued existence of America. Only blood-bought, Spirit-filled, redeemed, born-again believers who unite together, who fear nothing that breathes on this earth, are capable of winning this war. Will you step up and join fight?  One way to do that is to go to www.TheChristianRevolution.net and become involved.

Support The Transforming Word Ministries by sending your gifts to: