Looming Doom on the Horizon 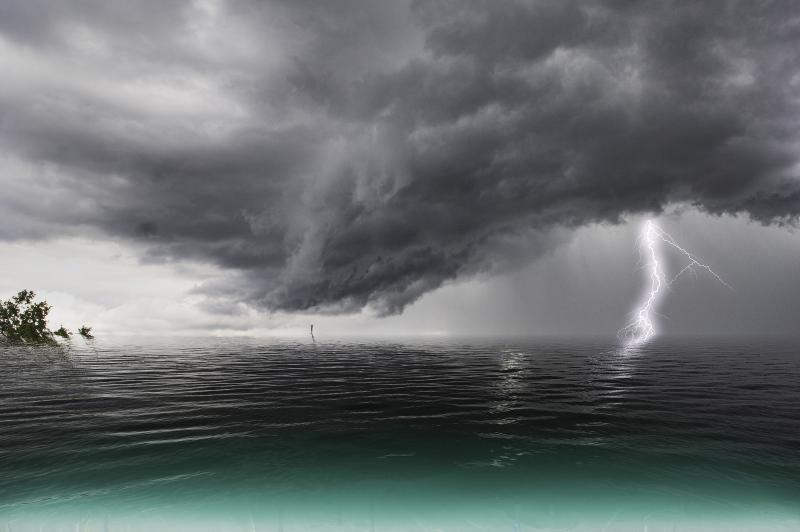 According to recent surveys, only about 17% of Americans say the country is headed in the right direction.  That’s roughly about the same number of people who get their news from MSNBC, and I’d guess the demographics are very similar.

Many today speak of the “Global Elites” — those wealthy few who control everything, those who orchestrate the never-ending manufactured “crises” that require them to acquire more and more control — and curtail more and more freedoms for citizens of Planet Earth.  These are the ones who consider themselves above the law, and indeed, they ARE above the laws of man, untouchable, unaccountable to anyone but the devil they serve…for now.

So what about them?  Are they better off today than they were four years ago?  In many ways, one could say “yes,” as their plans for world domination are moving forward at warp speed.  But it appears many of them are concerned about what their futures may hold as well.

In early September, Gustavo Arnal, the 52-year-old CFO of Bed, Bath and Beyond, committed suicide by throwing himself off the 18th floor of a Manhattan office building after massive layoffs at the company, and amid a $1.2 billion lawsuit in which he was charged with allegedly inflating the prices of company stock shares.

In the month of August alone, 2,150 corporate executives sold off huge amounts of shares in their own companies.  And the super rich are now preparing for a soon-coming “apocalypse” by installing underground bunkers.  According to an article in The Guardian, the “Rising S Company,” headquartered in Texas, builds and installs underground bunkers and tornado shelters, for as little as $40,000 for an 8’ X 12’ prefabricated steel unit.  But they also offer what they call “The Aristocrat,” which is a luxury series underground bunker, large enough for a family to live very comfortably in, complete with a pool and bowling alley.

And according to The Guardian, “A company called Vivos is selling luxury underground apartments in converted cold war munitions storage facilities, missile silos and other fortified locations around the world.  Like miniature resorts, they offer private suites for individuals and families — and larger common areas with pools, games, movies and dining.”  These facilities, which cater to the billionaire class, feature imitation natural sunlight, “sun-lit” natural garden areas, wine vaults and other amenities to make the wealthy feel at home.

Clearly, these so-called “Elites” are preparing for the consequences of their “Great Reset” plan in ways that are simply not available to us peasants.  Despite the current administration’s claims that we’re not in a “recession,” more than a third of US families who work full time, year-round, cannot afford to pay their bills now.  For “low income” families — those who earn less than $52,000 a year, it’s 78% who can no longer make ends meet in their monthly budgets.  One in six American households are now behind on their electric bills, and 3.8 million renters are facing eviction before winter, because they can’t afford to keep up with their rent.

On a recent trip to the grocery store, even I was surprised to find many of the shelves empty of items that had always been there before.  I was able to purchase the essentials of what I needed, but it cost over $40 for two small plastic bags of items.  The White House may be right — perhaps we’re not in a “recession,” but more likely, at the start of a full-blown depression, as the cost of goods and services continue to rise, more businesses are closing their doors, and those that remain open are begging for employees that simply can’t be found.

Meanwhile, homelessness continues to increase, as tent cities are exploding across the country.  Violent crime is out of control, along with illicit drug abuse, sexual deviancy, the brainwashing of our young children into sexual and moral perversion and hatred for their country, history and heritage, and extreme hopelessness.  What else should we expect in a nation that has rejected God and where most of our pastors have become self-help gurus rather than bold preachers of the whole Word of God?

Michael Snyder, writing for Sons of Liberty, quoted a reporter who recently visited some of the most exclusive parts of San Francisco:

“I saw complete hopelessness in the eyes of haunted souls, dragging themselves down the street looking for their next ‘fix.’  I saw men and women of all ages hunched over on the sidewalks with open wounds all over their bodies.  I saw the filthy tent cities, stinking with human excrement and strewn with needles and pipes. I saw children staring in horror at people dying right in front of them.”

Note: this is not in the “bad” part of town — this is in some of the wealthiest parts of San Francisco.  Another recent report revealed that 50% of residents of San Francisco have been victims of crime in the past year alone.  In Seattle, which voted to defund the police, that city has lost nearly 500 police officers — 125 just this year — and that city now resembles a third-world country as well. The same can be said of cities like Chicago, Detroit, St. Louis, Baltimore, and New York.

California has experienced rolling blackouts, as the energy grid cannot keep up with the demand for electricity to charge the “green” vehicles now owned by just 1% of that state’s population.  Yet the government there has doubled down on their “green” commands — further dooming their own people.  In Colorado, residents with “smart thermostats” were locked out of operating their air conditioners, the thermostats locked at 78 degrees, in the midst of a summer heat wave.

The news from Europe is even more dire.  In Germany, electric bills suddenly surged to over $2000 per month on average.  Those who cannot pay, have their electricity disconnected.  Homes without power are then deemed “uninhabitable” by city officials and the property is seized by the government.  People are warned of coming blackouts this winter, and urged to find alternative ways to heat their homes.  Wood has become a priceless commodity as people scurry to find what they can to stay warm.

This Great Reset is Communism on steroids, and here in the US, every one of our government agencies has been weaponized against the citizens.  The FBI raided Trump’s residence, then set their sights on all patriotic, conservative Americans.  Biden went on national television to declare at least half the country as “enemies of the state.”  Steve Bannon was arrested on the same day that 35 other patriots were either arrested or subpoenaed.  Even Mike Lindell was “swatted” by the FBI at a Hardees restaurant in Minnesota and had his cell phone confiscated by the New American Nazis.

I have several personal friends who’ve already been visited by the FBI — some multiple times — because of statements they’ve made, people they know or for Christian activism, like street preaching, sidewalk counseling at abortion centers or being in DC on January 6th.  None are violent.  All are committed Christians.  Yet they’ve been targeted by the FBI.  Honestly, I’m surprised my own front door hasn’t yet been broken down, because of the truth we publish in our newspaper and broadcast on radio and TV.  Wisconsin Christian News HAS been noted in court documents related to the January 6 rally because of statements made on our TV program, “WCN TV.”  No visits yet, but there are plenty of weaponized 3-letter agencies that have my name and number and it’s only a matter of time for me too.

But we must remember that this is a global takeover — not just an American one, and not just caused by Biden.  Biden is nothing more than a puppet to his Globalist New World Order masters.  Millions of illegals are flooding across our southern border — but most are not from Mexico.  Ironically, a majority are from Venezuela, fleeing the horrors of communism there.  I say “ironically,” because that’s the same system currently being installed here — and across the globe.  Why don’t the well-educated Leftists, Feminists and “Soy-boys” understand this?

I was recently speaking with a citizen of Mexico, and he related how the Mexican people are so angry with the policies of the US government, allowing the free flow of illegals — because to get to the US, they must pass through Mexico, and this person told me, they’re also destroying that country as they pass through, “like locusts,” he said.  No one can blame people seeking freedom from communism in countries like Venezuela.  But here we have a current-day, real-life example of what communism is and does, and yet we’re inviting it, implementing it’s policies, and adopting it’s ideologies in every area of society and government, while dismantling and destroying everything good in the USA in the process.

Meanwhile, the hypocrisy of the Left is stunning.  Recently, when fifty illegal immigrants were sent to Martha’s Vineyard, the governor of Massachusetts called up 125 National Guardsmen to respond to what was called a “Humanitarian Crisis.”  Texas and Arizona have also been sending illegals to Democratic strongholds that have declared themselves to be “sanctuary cities” — but the “sanctuary city” title seems to be no more than another attempt at virtue signaling by the Left, because the minute the illegals show up, the compassionate liberal mayors like Lori Lightfoot and Muriel Bowser become outraged and scream, “Not in MY back yard!”  Think of it: 50 illegals in Martha’s Vineyard — vacation-land for the rich and famous — is call for panic and rage.  But two million in Texas and Arizona border towns is “someone else’s problem.”

Where I live, I’m somewhat insulated from the madness we hear about in the bigger cities.  We’re not overrun with lawlessness, though our crime rate is notably rising.  We’re also not experiencing the deadly drought that the western 2/3 of our country is currently going through.    We can enjoy the green grass, wildflowers, lakes, hills, forests and abundant wildlife of God’s creation. But the decadence and decay of the Leftist/Communist agenda is invading here too,  it’s just more hidden.  Just like in the big cities, our small town libraries are featuring child pornography in children’s books.  Our schools are still sneaking the LGBTQP+ propaganda into the curriculum, along with critical race theory and  revisionist history.  Our pulpits are still silent on matters of critical urgency as the pastors continue to preach soft things to soothe peoples’ consciences, never taking a stand for righteousness, even though God’s Word is clear on all these matters.  This is what’s happening nation-wide and now the demons are targeting even the smallest of towns with perversion and filth.  So while many may not see it here as openly as you do in other places, there’s literally no place left in the USA that this evil hasn’t permeated.

Recently, someone asked me what the Holy Spirit was telling me.  I responded, “He’s saying, ‘it’s good that you’re preparing for what is to come, to protect and provide for your family the best you can.  But know and understand that nothing you can do will ever fully prepare you, because you will never be fully prepared.  What’s coming is unlike anything you can imagine now and you cannot adequately plan for it.  You will have your faith and your strength severely tested and you will face fiery trials.  You will have to learn to rely on God, and God alone, like never before.  He is your only hope, and the only hope of all humanity.  Prepare for tribulation.  And never forget that we overcome the enemy by the word of our testimony, the blood of the Lamb and loving not our own lives, even unto death.”  THAT is what the Holy Spirit has been telling me, in case you wanted to know.  And also, “Do not grow weary in well doing,” which I must admit, is becoming a real challenge for me these days.