Which Would You Rather Have? 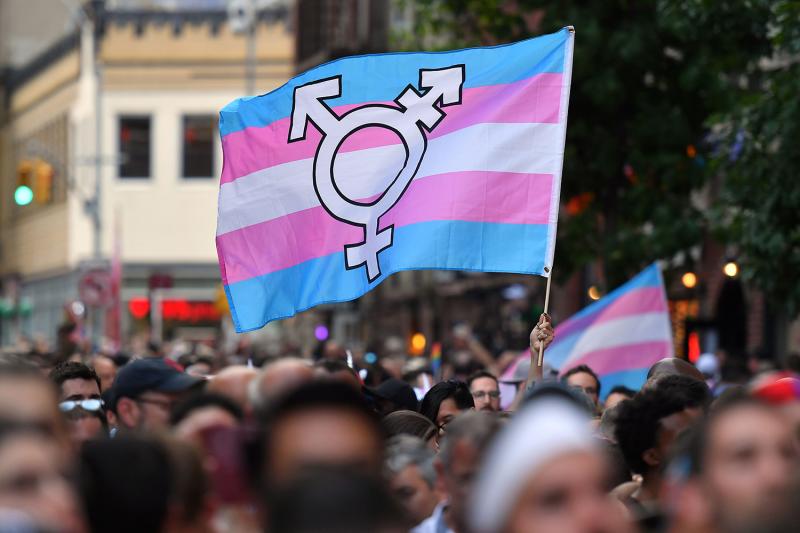 Complimentary Story
On Monday October 24th, the Young America’s Foundation at the University of Wisconsin invited Matt Walsh, the producer of the blockbuster documentary, titled “What Is A Woman?”  to speak at the UW-Madison Campus.  Walsh held a question-and-answer session after the showing of the film.

Even before the event began, the Leftist lunatics were out in force, causing extensive damage to the student union, including profanity-filled graffiti spray painted across the Memorial Union’s front steps, on the terrace, in Alumni Park and over a Bucky Badger statue.
As the start time for the event neared, about 500 protestors took to the streets with more violence, chanting, and signs comparing Walsh to a Nazi; others calling him a pedophile.

About ten people from Mercy Seat Christian Church in Milwaukee also attended the event to minister to the protestors and support Walsh and his message.  The Christians were under constant physical and verbal attack.  One courageous young man, Nick Proell, held a sign with 1 Corinthians 13:6 written on it: “Love does not delight in evil but rejoices with the truth.”

This young man — a teenager — went along with his peers from Mercy Seat Church to preach and start conversations about God’s design for human sexuality among the violent  protestors outside the event.  He set his Bible down for a minute in order to engage a crowd of attackers in a conversation, and then someone grabbed his Bible, tore it to shreds and one of the attackers even began eating the pages.

They also stole more than $1000 of the group’s equipment, including cameras and microphones.  After the attack, Proell told the Daily Wire, “...as a Christian I’m called to love God and love my neighbor as myself.

“If I saw someone walking off a cliff, how much would I have to hate them to see them walking off a cliff and not tell them there’s a way out? These people are just like me before Jesus — sinners who love their sin and hate God.  But praise God, He gives sinners the greatest joy, peace, and pleasure when He saves their soul from destruction. And now, because God saved me, I have so much joy. I want to go and tell everyone about this life-changing good news, that you can be reconciled to your Creator by repenting of your sins and trusting in Jesus, who bore the punishment we deserve by dying on a cross. It’s the most loving message I could tell anyone.”

Proell explained that radical gender ideology and child mutilation are fundamentally opposed to the biblical worldview since “God made man and woman in His image,” each with distinct roles and characteristics, but “nevertheless equal” in value.

How did the college respond to all this?  Well, the Dean of Students called Walsh a speaker whose views “We believe are harmful to the trans community.”  Walsh, himself, noted that UW-Madison was taking the side of the “trans” protestors and said the University’s actions demonstrated the “worst cowardice I’ve ever seen by a university.

But the rabid and rage-filled pro-trans protestors were greatly outnumbered by the sold-out audience who wanted to hear Walsh speak and see the movie.  Of course, the mainstream media joined the side of the protestors and the Milwaukee Journal Sentinel called Walsh “an anti-trans right-wing conservative commentator” and placed the blame for the vandalism, violence and destruction squarely on Walsh’s shoulders.  What else would we expect them to do?

Our Universities and College campuses should be places of higher learning — places where ideas can be discussed and debated rationally.  But that’s a long-dead concept.  And when The Daily Wire attempted to debut the film Walsh produced, “What Is A Woman,” their website was attacked, delaying the film’s release.  By the way, Matt Walsh has also been attacked when invited to speak at Universities in Houston, Illinois and Florida.

If you’ve not seen the film “What Is A Woman,” I would encourage you to do so, because it takes on the idea of “gender dysphoria” directly — with Walsh asking the simple question: “What is a woman.”  He asks University professors, sociologists, social workers, doctors, counselors, teachers and everyday people on the street.  None can answer that simple question — except primitive African tribesmen, who thought the question was ridiculous because in their culture, the idea of “gender dysphoria” is a biological absurdity.  The movie does have some adult language, so beware of that, but it’s difficult to have an adult conversation without using adult language — unless, of course, you’re in an American kindergarten classroom, where today, anything goes.

Of course, Matt Walsh is not the only one the Left hates.  He’s just the latest target.  This past spring, conservative speaker Michael Knowles was invited to speak at Boston University, and was opposed by several student groups on that campus, including: “BU Students for Reproductive Freedom,” “Young Democratic Socialists,” “The Trans Listening Circle,” “The Queer Activist Collective,” “The Mental Health Collective,” and a group called “OutLAW.”  These groups also created what they called “organized safe spaces” throughout the campus for trans and queer students while the event was being held.  So these universities, where students once fought for de-segregation and equality are now voluntarily  SELF-segregating in “safe spaces.”  Go figure. Knowles made the very on-target point that “Very radical, very creepy people are trying to indoctrinate children into sexual ideologies.”

Indeed they are.  Even universities and teachers’ unions have been caught instructing future teachers of pre-school, kindergarten, elementary school, middle school, high school and college students how to infuse the LGBTQP+ indoctrination into the minds of our children and young adults — without the parents finding out.  Many schools across the country are now providing “trans closets” where kids can come to school dressed as their biological gender, but then before school starts, go to the “trans closet” and dress as the opposite sex — then change back before going home.  So parents are kept in the dark as teachers and so-called “counselors” indulge and encourage the kids in the perversion and confusion they teach.  You should be aware that these same type of “trans closets” are now being offered by homosexual- and trans-affirming so-called “churches” too.

Earlier in October, the FBI raided the home of Chet Gallagher, with guns drawn, and arrested eleven peaceful Christians who minister outside abortion centers.  Many of those eleven are friends that I’ve also ministered alongside at abortion centers around the country.  The supposed “crime” they committed was blocking the entrance to an abortion facility — 18 months ago.  But videos show the group was simply gathered outside, attempting to speak to the women and girls as they were led by “death-scorts” into the murder mills.  They were also seen singing hymns and praying.  Among those now charged is 87-year-old Eva Edl, a holocaust survivor, who I’ve also worked alongside on the street.  This sweet lady would never harm a fly and all of them have sincere hearts of compassion for the innocent children — and the women and girls being exploited by the blood lust of the abortion industry.  But now, they each face a potential 11 years in prison and a $250,000 fine.

Around that same time, our good friend, Pastor Bill Dunfee from Frazeysburg, Ohio, was also arrested by the FBI.  His crime was for a sermon he gave to his church in December of 2020, regarding the obviously fraudulent election of that year.  He’s also charged with engaging in physical violence in DC on January 6th of 2021.  The mainstream media will spin this to make Pastor Bill look like a right-wing fanatic and a criminal.  I can tell you, he IS a bold, courageous preacher of God’s Word but I also know him to be a soft-hearted, loving and compassionate man, full of mercy and grace — and I know for a fact that he’d never encourage any form of violence against anyone.

It’s unlikely any of the charges against these Christians can be proven.  But that doesn’t really matter today.  Because today, our so-called “justice system” has been weaponized against law-abiding citizens and especially against Christians and conservatives who dare speak the truth on ANY matter — and absolutely against any who dare GO and DO things that conflict with the twisted ideologies of the Left.  Parents who object to the sexualization and pornography being pushed in public schools — and voice their concerns at school board meetings are now officially “domestic terrorists.”  I should mention, the point was recently made, that some of the pro-sodomite and pro- “trans” books now being made mandatory reading in our public schools are so filthy and foul that it’s actually illegal for parents to read portions of them at public school board meetings — because those meetings are usually broadcast on local cable access TV channels — and the FCC prohibits pornography and especially CHILD PORN to be broadcast.  Yet it’s spoon-fed to our toddlers as early as possible.

The fight for sanity continues in public schools all across this country.  Just recently, Cody Hiller, a Physical Education teacher for 14 years at West Frankfort High School in Illinois, refused to follow orders and let a girl into the boys’ locker room.  Hiller was removed from his job and put on disciplinary leave.  This is what happens when you protect kids.  This is what happens when you stand for righteousness.  Need I mention the hundreds of J6 political prisoners still being held in jail — still without being charged with a crime and still without a trial and still without bail?  It’s been almost two years.  All they did was show up with flags and banners to a rally of millions to present a redress of grievances.

Let me remind you of the First Amendment of our Constitution: “Congress shall make no law respecting an establishment of religion, or prohibiting the free exercise thereof; or abridging the freedom of speech, or of the press; or the right of the people peaceably to assemble, and to petition the government for a redress of grievances.”  The thing is, CONGRESS hasn’t made any laws that tread on these rights.  CONGRESS has done virtually nothing other than enrich their own bank accounts — even when so-called “conservatives” have been in power.  No, our free exercise of religion has been struck down by government health officials. Our freedom of speech has been done away with by big tech, Google and social media.  Our “press” is owned by the Globalist Banksters, “Peaceful Assembly” is now determined by which side you’re on — the devil’s team or God’s team.  If you stand for righteousness you’re not considered “peaceful.”  Even if you’re 87 years old and just sitting down singing hymns.  And if you attempt to petition your government for a redress of grievances, you’re a domestic terrorist.  Because Joe Biden’s handlers say you are.

I’ve been to the streets and I’ve seen, first-hand how these Leftist lunatics behave.  After years of public school and college indoctrination, they are literally filled with extreme hatred and rage any time their brainwashed minds are challenged with an ounce of truth.  They turn blue in the face and scream like demons, they lash out in violence, they vandalize, steal, loot, burn, and destroy.  Full on temper tantrums and mental meltdowns — until they’re able to return to their “safe spaces.”  They advocate for communism and call patriots and truth-tellers “Nazis.” Dear Lord, what have we come to?