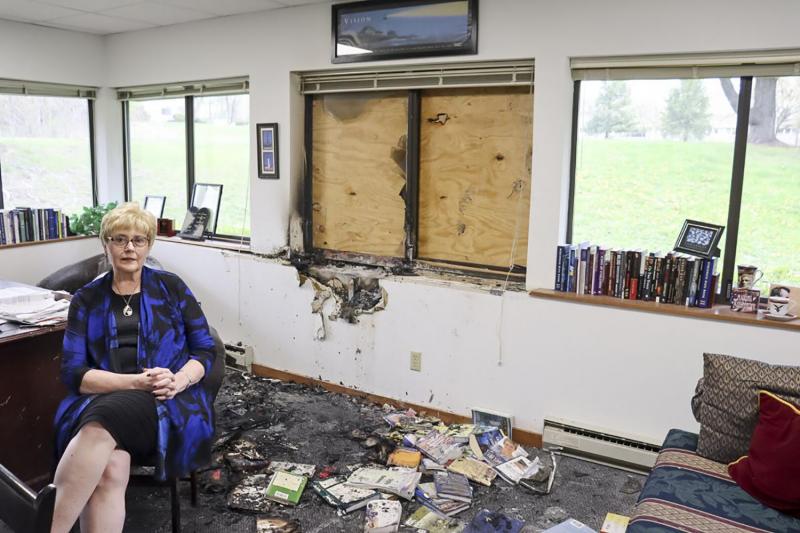 Early in the morning on Mothers’ Day, May 8, left-wing pro-abortion activists threw two Molotov cocktails into our Wisconsin Family Council office and started a fire. To make sure we got the message, the arsonists also spray-painted, “If abortions aren’t safe, then you aren’t either” on the side of our building.

We assumed that someone would be arrested, indicted, or prosecuted, but six months later our attackers remain free, and justice has not been served.  In recent weeks we’ve sent the Madison Police Department an open records request for any and all documents related to our case. That request was denied, with the department telling us the investigation is ongoing — even though we’ve received no report from them since early June. In the meantime, we have put out a $5000 reward for any information leading to the arrest and conviction of the attackers.

Since the attack on our office, violent pro-abortion extremists have attacked at least 86 Catholic churches and 74 pregnancy resource centers and pro-life organizations. The FBI has said that it’s investigating the attacks, but not a single arrest has been made.

When there’s this level of inaction with the investigation, you start asking questions, such as “is it who we are and what we believe?”

Meanwhile, the FBI has been busy targeting non-violent pro-lifers under the1994 FACE Act, or Freedom of Access to Clinic Entrances Act. On October 14, the Department of Justice announced the indictment of pro-life activist Herb Geraghty, bringing the total indictments of nonviolent pro-life protesters targeted under the FACE Act this year to 22.

Geraghty is being accused of participating in a “reproductive health care clinic blockade in Washington, D.C., on Oct. 22, 2020.” LifeSite News reports that “Once inside, the rescuers sought to offer help to families who were seeking abortion, counselling them to change their minds about aborting their babies, praying with them, and informing them about local resource centers. Rescuers blocked the abortion facility’s entrances and stationed themselves around the complex to physically prevent access to the building.”

If found guilty, Geraghty and the nine other defendants face “up to a maximum of 11 years in prison, three years of supervised release and a fine of up to $260,000.”

This is a far less dangerous incident than the firebombing that occurred at our office. These pro-lifers are not damaging property or setting buildings on fire. Yet this is the kind of incident the FBI is prioritizing.

The FBI also recently raided the home of Catholic pro-life speaker Mark Houck after he allegedly pushed a man outside of an abortion clinic a year ago in an attempt to defend his twelve-year-old son. On September 23, a group of 25 to 30 FBI agents swarmed Houck’s home with his wife and seven children inside. With rifles pointed in firing position, the agents demanded that Houck open the door and threatened to bust it down.

This was clearly an excessive and unnecessary use of force meant to intimidate pro-lifers.  In fact, that’s the point of all these attacks: to scare pro-life individuals and conservatives in general to the point where we quit showing up, standing up, and speaking up.

While violent pro-abortion extremists and arsonists remain free, the FBI is wasting judicial resources and taxpayer dollars targeting non-violent pro-lifers. This blatant double standard and partisanship from Biden’s Department of Justice should not be tolerated.

Elected representatives need to hold the Biden administration and law enforcement accountable. We are thankful Wisconsin US Senator Ron Johnson, as well as Wisconsin members of Congress Scott Fitzgerald, Tom Tiffany, Mike Gallagher, Glenn Grothman, and Bryan Steil wrote US Attorney General Merrick Garland and the Department of Justice, demanding they immediately and aggressively pursue the criminals who attacked our office.

Our elected officials at every level of government should demand transparency, accountability, and justice for the pro-life victims of the violent attacks since the Dobbs ruling. Justice cannot prevail with a completely biased system that’s more interested in political gain than maintaining equal treatment under the law.