Communism On the Rise in America 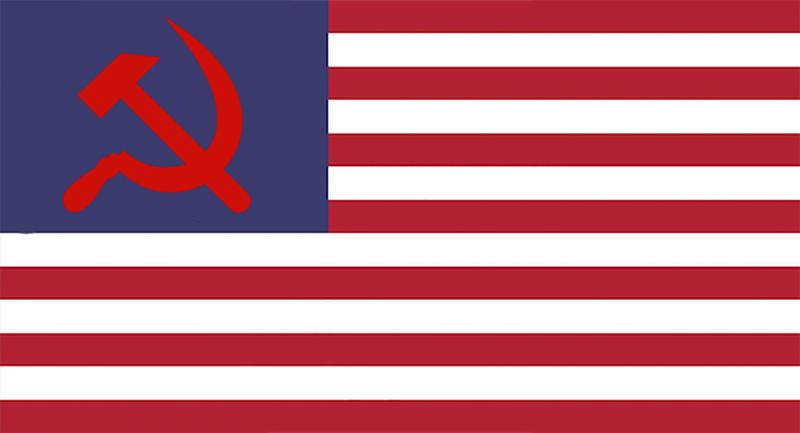 As a piece of our party’s literature states: Communism isn’t coming to America…it is already here. Karl Marx’s plan to enslave human beings under the communist ideology is well underway in our nation. Consider his evil writings below.

Communist Manifesto 10-Point Plan
1). Abolition of private property in land and applications of all rents of land to public purpose.

3). Abolition of all rights of inheritance.

4). Confiscation of the property of all emigrants and rebels.

5). Centralization of credit in the hands of the state, by means of a national bank with state capital and an exclusive monopoly.

6). Centralization of the means of communication and transportation in the hands of the state.

7). Extension of factories and instruments of production owned by the state: the bringing into cultivation of waste lands, and the improvement of soil generally in accordance with a common plan.

8). Equal obligation of all to work and the establishment of industrial armies, especially for agriculture.

9). Combination of agriculture with manufacturing industries; gradual abolition of the distinction between town and country by a more equitable distribution of the population over the country.

10). Free education of all children in government schools. Abolition of children’s factory labor in its present form. Combination of education with industrial production, etc.

In light of the indoctrination and the sexualizing of children as early as possible, I want to address Number Ten in more detail.

Since before Barack Obama, there has been a movement afoot by communists in America (aka – Progressives or Leftists) to “fundamentally transform America” and their efforts are accelerating.  Leftists know they will NEVER convince the Baby Boomers and Generation X’ers like myself of any of the following insanity 1) there are an infinite amount of genders, 2) that trans-women are real women and trans-men are real men 3) that homosexual “marriage” is the same as one-man, one-woman marriage and that homosexuals are “born that way” and can’t change, 4) that gender reassignment surgeries on children are right and that children are mentally mature enough to make such life-altering decisions, 6) that drag queen story time and children dancing provocatively in drag in front of adults is “wholesome entertainment” and, 6) that men and women are the same. Leftists know Godly, traditional-minded adults are set in our beliefs and they won’t convince us. For their communist plan and the fundamental transformation of America to have any hope of succeeding, they have to get to the children.

In the public school system, Leftists don’t have four years to “teach” the children…they have twelve. That’s a lot of time in which they can do a lot of emotional/mental damage to young people.

Children’s minds are malleable and they are impressionable. Parents, you may have noticed that as your children enter puberty, they began pushing against your authority, seeing what they could “get away with” and asserting their independence. They are not as easy to disciple as when they were much younger. Still, if you disciplined them well and showed them what was right and wrong by your example (practicing what you preach) and surrounded them with moral role models, especially with strong fathers in the lives of young men, they will grow out of that phase and into strong, law-abiding, moral men and women. “Whoever spares the rod hates their children, but the one who loves their children is careful to discipline them.” – Proverbs 13:24.

Why are the Leftists raging so much to the point of declaring that parents who object to sexualizing children at school board meetings are “domestic terrorists” who should have their children taken away if they don’t accept their child’s new gender identity? Because they are desperate. Consider –

1). Their teachings in public schools, which used to be hidden, are now being exposed everywhere, including the sexually obscene books in libraries which school board members try to prevent the reading of at school board meetings because they are so bad.

2). Leftists used to be the primary attendees at school board meetings. Now parents are turning out in force to challenge them.

3). They know if they lose control over the children’s “education,” they lose. This is for all the marbles, folks. Leftists either reassert their control over the children or whole generations of children will grow up to practice moral absolutes, exercise common sense, know what their Constitutional rights are (and what the federal government is NOT permitted to do), and they will know discernment. Communists need people to be ignorant and dependent on the central government they control. Critical independent thinkers are not easy to rule and subjugate.

The good news is, the more Leftists call us bigots, racists, and homophobes, yell at us and try and silence us on social media, the more it shows their desperation. They are trying bullying and intimidation tactics on adults to get us to back down so they can go back to indoctrination as usual. Good luck with that, Leftists.

Take heart, friends. God is in control and with His help and in our repentance to Him, we are turning the tide. If anything is going to be “uprooted” in America, from here on out it will be communism.