What Sanctified Christians Are Supposed To Do 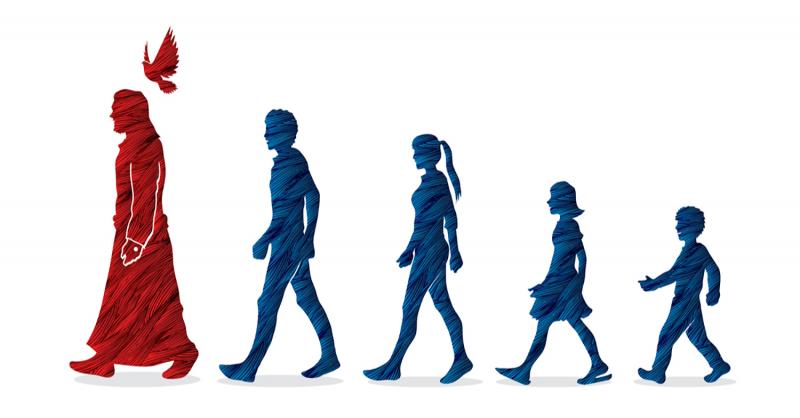 “…to sanctify her, cleansing her by the washing with water through the Word, and to present her to Himself as a glorious church, without stain or wrinkle or any such blemish, but holy and blameless.”  (Ephesians 5:26-27  Berean Study Bible).

The sanctifying work of our Messiah leads to His being able to present the assemblies to Himself, with out stain or wrinkle; holy and blameless!

The Local Assembly Personal Picture
Here at Set Apart Ministries, we have been praying for many years for the exposure of that which is not pleasing to our Elohim — the stains and wrinkles:  first within ourselves and our assembly, but then also in the church and the world.  Initially, it was really rather frightening to be this specific and direct. We understand when new members seem overwhelmed by this kind of prayer. We were too!  Our only hope of positive transformation IS when He exposes that which needs to be addressed. We quickly learned to also ask for an extra measure of courage, perseverance and joy to allow us to fully comprehend what was exposed and work toward a resolution that was pleasing to Him. He has been faithful to this request among us.   It hasn’t ever been easy but we are seeing fruit.

Believers have long recognized that judgment begins in the House of God.   But all too often, it seems our fingers are pointing elsewhere and asking that THEIR issues be exposed! We may think of it as a problem among leadership or another denomination, but it seems rarely do we take it to the micro level of our OWN life and walk.   It does require a strengthening of our faith that only our Messiah can provide to be able to find the courage to face what is exposed and then invite Him in to correct it. If we don’t practice this kind of prayer and personal discipline, we may go forth against the enemy and find ourselves too easily overpowered and defeated. We could all too easily find ourselves at the Judgement seat having been totally unaware of how we were displeasing to our Father…with no time to repent!

When we do practice this discipline, we face some difficulties that might have just been brushed under the proverbial rug.  All too often believers have accepted a veneer of faith, in themselves and in others: the appearance of Godliness without substance in order to look good! Instead, we need to comprehend that hardships do NOT mean that we are less than faithful!

“Many hardships and perplexing circumstances confront the righteous, But the LORD rescues him from them all.”  (Psalm 34: 19  AMP).

Since judgement begins in the House of God, entered only by faith, we also need to recognize that repentance and getting cleaned up through the sanctification process also must begin here…in our own hearts, the home of the Ruach haKodesh/Holy Spirit and in our own assemblies.  We really cannot prevail in this sanctification process under our own steam.

It is no longer just “crooked ideas” but now crooked action!   In these days of gender confusion and medical mutilations we see people in public mocking Him, in their own lives and how they demand others live. Teaching children that men can get pregnant?  That we should choose which gender we want to be and get surgical and chemical treatment to try to make it happen?  Most distressing to me is that this kind of destructive behavior has moved from being a small element of confused people to the media-generated appearance of being “normal!”

It is difficult to tear our eyes away from all the craziness going on and bring our eyes back to our Messiah and His ways. The assaults on our beliefs and our lives have been a type of trauma for many; especially these last few years with all the lock downs and totalitarian government actions. The strange thing is that when one is traumatized, the fear of what is going on DOES cause people to stay focused on the source of the trauma; in anticipation of what might happen next!

I believe that those who serve evil are well aware of this response and are manipulating it to their unholy advantage.  Unfortunately, it seems to be working too well when we see the sorry state of our assemblies and shepherds that do not shepherd their sheep.

The October edition of WCN covered many of these signs of our times. Coach Daubenmire asked: “What are Christians Supposed to Do?”  Chris McMahon provided some much needed encouragement in recognition of kindness.  Rev. Cain outlined the many ways we have kicked our God’s ways to the sidelines, in exchange for our own comfort; and then we wonder why He isn’t blessing us.  Cain urged all to earnestly contend for the faith given once to the saints (Jude 1:3) and to teach the WHOLE counsel of God; not the cherry picking type of counsel!  We agree!

Along with allowing the sanctification process, faith and prayers to lead to action, we also need to be good Bereans and exercise God honoring discernment about what His whole counsel really is.

The Larger Corporate Picture
That question of “earnestly contending for the faith once given to the saints” became a focal point of study for me many years ago. I was asked about my then “newer” Hebraic understanding of how our God has instructed us to live.  The questioner then asserted that they were happy as they were, convinced that the Roman Catholic Church (RCC) was the “mother church” to all others and no other information was needed. I had heard this kind of thing before, but this time it sent me to research.

How far back do you have to go to get to this first given faith?
On our website, you can see the result of that research (Under Study Resources, then drop down:  “Faith Given Once” title) a flow chart of developments. There is also a companion narrative with a short description of each chart element.

It appears that faith was given in the beginning, when our God created all things, and inspired the writing of the Scriptures. These writings outlined what He intended for His relationship with His creation, including human beings, and what He promised in return. A covenant keeping God!  Over and over, He repeats similar situations and affirms His plan and expectations of those who honor Him. It is possible to track what is called “Generations of Promise” of people throughout the Word who honored God as well as “Generations of Conflict” of those who have not yielded to God.  The “conflict” ones have been identified as having an “Amalekite” or an ‘’Anti-christ” spirit. Over and over, He has commissioned prophets, all issuing the call to turn back to His ways, and repent!  Ultimately, the prophetic picture given is that this conflict will one day be resolved as our Messiah returns and God again brings the two main people groups back together as one stick in His Hand (Ezekiel 37). Revelation speaks of returning to the garden. I’m not so sure that He will care really what man-made denomination we have been with; but more so, what we have said and done in relation to Messiah’s work on our behalf. Are we part of the generations of promise or of conflict? Whether we are “Jew’ or “Gentile” won’t matter…only that we are grafted in by faith in Messiah Yeshua’s/Jesus’ work on our behalf!

I don’t see anywhere in the Bible that Rome is established as the “mother” or home base of our faith. Over and over I see Jerusalem!  Here is the history lesson, very simplified. Halley’s Bible Handbook covers much of this history.  It seems that when the apostles were traveling and establishing assemblies in various cities, certain cities were more of a “hub” than others. These leaders had a higher status/decision making authority than others. Rome was one of them. As is all too human, these leaders experienced contentiousness and a desire for one to be higher than all. It has been reported that the leader of the Rome assembly placed great pressure and perhaps even threat of death if the others refused to swear allegiance to him.  Another large contingent was mainly based in Antioch. This group refused to yield to Rome and was the base for the Eastern Orthodox church.

There are connections between Jerusalem and Rome/Vatican but much of it is contentious and shrouded in secrecy. The Vatican has been given a presence in Jerusalem but the current 2022 focus seems to be on upholding Jerusalem as a Universal City: home to the faiths of Jews, Christians and Muslims.  (This “corpus separatum” was actually already considered even before the Balfour Declaration but that whole story is politically complex and too much for now.)

In that the RCC made declarations of additional actions beyond Messiah’s atonement needed for salvation, it is true that the people/churches who protested these things were known as “Protestants” and could be considered “daughter” churches in that sense. Though they protested some things, they held on to others. One example:  I have seen historical reports that both Martin Luther of the Reformation Era, and Dwight L. Moody, American Evangelist, knew that the Sabbath Day had never been changed to Sunday by God. I also have direct quotes from leaders in the RCC who declare that God didn’t change the Sabbath, but they could and did do so. These and other leaders, decided to address only some of the issues like this and let some things remain, presumably in the interest of not overwhelming people with too much at once.

For me, heeding the call “to contend earnestly for the faith once given to the saints” resulted in my understanding that none of the “daughter” churches or the “mother” church of RCC are that base of “faith once given.” It is a modern call echoing Paul:

“What I mean is this: Individuals among you are saying, ‘I follow Paul,’ ‘I follow Apollos,’ ‘I follow Cephas,’ or ‘I follow Christ.’  Is Christ divided? Was Paul crucified for you? Were you baptized into the name of Paul?…” (1 Corinthians 1:12-13  Berean Study Bible).

Our Elohim chose the people, the land and the language through which He would bring Messiah to walk among us. The Torah, the Prophets and the Writings, what we call the Old Testament are all about that Messiah Yeshua and what He would do; the pattern for us to follow.  The New Testament confirms how He fulfilled the plan He and the Father had made before the foundation of the world was laid. This seemed like a great recommendation to follow His Whole Word to me.

(To be very clear: this is NOT a blanket recommendation for today’s Rabbinic Judaism. Sadly, it is also necessary to say that there are contentious elements among what is understood as “Jewish” or Rabbinic Judaism.  Just as the daughter churches hold truth and error, so do the segments in Judaism. A lengthy subject to review at another time.)

So what are we to do? Those grafted in by faith in Messiah are to FIRST follow Messiah and walk after Him as He walked in all of the Father’s ways and instructions.  When we are fully walking after Him in His ways, it is called righteousness and holiness, and He promises to rescue us. THEN we confront the adversary!

“But we have this treasure in jars of clay, to show that the surpassing power belongs to God and not to us. We are afflicted in every way, but not crushed; perplexed, but not driven to despair; persecuted, but not forsaken; struck down, but not destroyed; always carrying in the body the death of Jesus, so that the life of Jesus may also be manifested in our bodies.” (2 Corinthians 4:7-10).

If you would like to see more along this line of understanding please go to our website.