The Deception Of the Sorcerers 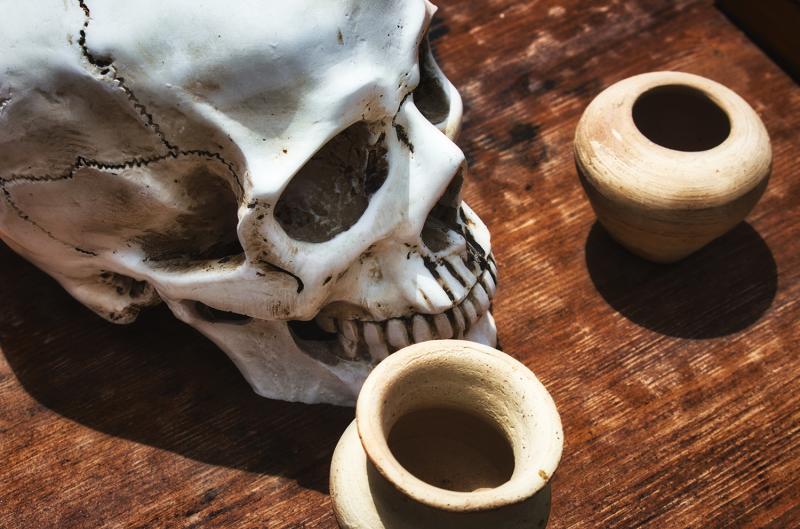 Complimentary Story
Some alarming information has come my way recently, and once again, it’s regarding our young people.  According to the Pew Research Center, 57% of “Generation Z” are now taking prescription medication for “serious mental illness.”  “Gen Z” includes those born between 1997 and 2012, now ages 10 - 25.  The mental issues they’re dealing with include anxiety disorders, ADHD, chronic depression and post-traumatic stress disorder.

According to the research, 80% deal with bouts of depression and 90% deal with anxiety on a daily basis.  Of those surveyed, 75% report they’ve been negatively impacted mentally by the COVID lockdowns and related restrictions.  Twenty percent now see a therapist on a regular basis, 39% get therapy for mental health issues once a week and 57% take prescription drugs daily, just to cope.

Digging deeper into the study, we find that 85% admit they’re worried about the future in general.  They worry about the economy, having enough money to survive, the environment and “climate change,” and loss of trust in our political leaders.  Nearly 90% believe that their generation won’t be successful at all in the future.  Ninety percent say they can’t make ends meet each month; 66% don’t feel financially stable at all.  About half don’t feel ready to join the workforce, for a variety of reasons.

According to an article by Natural News, “On top of the economic uncertainty, the young generation is dealing with massive amounts of psychological abuse and spiritual oppression stemming from government and pharmaceutical propaganda and abusive mandates. An entire generation is being trained to fear the unknown, to accept germaphobia as a way of life, and to live isolated on screens. This generation has been taught that coming together to worship God is a prohibited act, but charging through streets demanding social justice is an act of virtue. This generation has been taught to stay home and stay safe, while team sports, group activities, and church assembly are shuttered. The very activities that bring people together, that promote community and achievement are replaced by a screen-driven life, dictated by algorithms and ads, where real knowledge is buried and propaganda is disseminated only to manipulate and control.”

The article went on to say, “This generation is having the individuality stripped from them, as they are taught to take the role of a victim and find refuge on the ever-expanding spectrum of false gender identities...Young people are now expected to go along with Marxist ideals that strip them of their dignity, as they are indoctrinated to succumb to some societal cause of safety and ‘greater good.’ But no matter what the young people are promised – free this, free that, a more inclusive society – the dictates of this Marxist state only depress them further. Not only are they being stripped of their unique individuality, but their minds are being programmed to follow group think narratives that dictate their path in life...Their God-given potential is being suppressed by false gods, vanity, bitterness, envy, get-rich-quick schemes, and other hollow pursuits.”

Meanwhile, Big Government and Big Pharma’s solution to the explosion of mental illness — which THEY caused — is more pharmaceutical drugs, and more “recreational” drugs.  Marijuana is now legal in 22 states and it’s no secret that Fentanyl has become the number one “street drug” in America today, with a free flow of this deadly concoction at our open southern border.

Have you noticed that with the explosion of mental illness in America, there has also been an explosion of prescription drugs?  And as a people, we’ve been trained, since about the 1980s, to believe that the trusted “white coats” — the doctors — have a pill for everything now.  We’ve been trained to rely on a pill for our every ill.

This is not by accident.  Big Pharma has an unlimited amount of money to push drugs on the public.  Have you noticed all the TV, radio and print ads promoting drugs in our culture?  And have you noticed that in your typical TV or radio ad for a pharmaceutical drug, they spend up to 50% of the costly air time listing the harmful side effects of the drug?  Look at a similar ad in any magazine or newspaper.  One page features the “benefits” of the drug, and the following three pages list the dangers and warnings about the drug.  It seems that by swallowing these “miracles of modern science,” we’re trading one malady for up to 20-30 others.

And today, Big Pharma is the largest business in the world, with more power, influence, money and control than even Big Oil.  Over the last two years, many have been grossly deceived by the lies of Big Pharma regarding the so-called “benefits” of the COVID stabs. These “depopulation shots” were forced upon the public, even though the drug companies KNEW they were deadly before they were ever released, and now Pfizer, Moderna and others are raking in billions of dollars in profits while people are being seriously injured or killed by them.  Now, these deadly things have even been added to the “routine vaccination schedules” for young children.  Young children, who have a ZERO PERCENT chance of COVID death.

All this under the guise of “healthcare.”  But this is no more “healthcare” than an abortion is “healthcare.”  But there is a serious spiritual component to all this as well.  Most Christians are aware that the Bible prohibits dabbling in witchcraft and sorcery.  These are abominations to the Lord and the very definition of the “sinful nature.”  In Galatians 5:19-20, Paul writes, “The acts of the sinful nature are obvious: sexual immorality, impurity and debauchery; idolatry and witchcraft.”

The New Testament was originally written in Greek, and the Greek word used in this passage for “witchcraft” is “Pharmakeia.”  It’s root word is “Pharmakon,” which refers to a “druggist, pharmacist, poisoner, magician or sorcerer.”  Our modern words “Pharmacy” and “Pharmaceutical” come directly from the Greek word “Pharmakeia.”  Today’s modern dictionary defines “Pharmakeia” as “the use of, or administering of drugs,” “poisoning,” “the use of drugs, potions, spells, witchcraft and sorcery.”

Since ancient times, witches, magicians and sorcerers have incorporated the use of mind-altering potions, poisons and drugs to achieve their desired results.  All throughout history, drugs have been an integral part of black magic and the occult.  Through the use of these mind-altering drugs — and in particular, the very “anti-depressant” and “anti-anxiety” drugs our young people are now taking DAILY just to “cope,” the mind is able to be opened up to hypnotic suggestion, an altered state of consciousness and thereby susceptible to demonic influence.

What is the main side effect of most every anti-depressant drug?  By the drug makers’ own admission, it is “the increased risk of suicidal thoughts and behaviors.”  So, is it possible that through this sorcery, this Pharmakeia, that the whole world is being deceived?

Throughout the 20th Century, “street” drugs were a plague on society. Most people in America will readily associate marijuana, LSD, heroin, cocaine, etc with the 1960s. Is it a coincidence that the Supreme Court banned Bible reading and prayer in public schools in 1962 and ‘63 — and in that same decade, the use of illicit mind-altering drugs ran rampant among our country’s young people?  And all of this amidst a backdrop of unbridled sexual immorality and Godlessness.  Is it a coincidence that ten years later, we ruled it lawful to kill unborn babies in the womb?  Can one consider these things and still believe that the use of mind-altering drugs has no spiritual effect? That it does not open the door to demonic influence?

The modern pharmaceutical industry, as we know it today, actually has its roots in Nazi Germany.  It’s a historical fact that it began with the I.G. Farben Company, which led in funding Hitler’s rise to power.  Their drugs and poison gas made the medical experiments and mass extermination of “useless eaters” possible.  The major Big Pharma companies of today came from the breakup of I.G. Farben after the war.

The tentacles of Big Pharma now reach into nearly every area of our lives.  One source indicates that more than 70% of the world’s population is taking at least one prescription drug every day now.  Big Pharma controls the healthcare system by financially supporting hospitals — thus we had the “Fauci Hospital Protocols” during COVID, where the ONLY drug doctors were allowed to use to treat patients was Remdesivir — a super deadly drug that destroys the internal organs.  In fact, clinical trials of this poison were halted in Africa because so many were dying from it.  But Fauci mandated it’s use in American hospitals for COVID treatment.

And have you noticed that during every election cycle, politicians use drugs to further frighten people?  The usual statement is, “Senior citizens living on fixed incomes are forced to choose between food and the prescription drugs they need.”  I find it interesting that not so many years ago, our parents and grandparents didn’t need ANY drugs for their survival, and their overall health was better.  We didn’t have millions suffering from heart disease, cancer, diabetes, depression, anxiety or a host of sexually transmitted diseases.  What did they have that we don’t have?

Now if these drugs actually cured disease, perhaps it wouldn’t be so bad.  But in reality, prescription drugs — taken properly as prescribed by doctors — account for the cause of the deaths of 200,000 Americans every year.  I dare say that with the advent of the COVID jabs, the kill rate has been made even more efficient.

Revelation 18:23, “And the light of a candle shall shine no more at all in thee; and the voice of the bridegroom and of the bride shall be heard no more at all in thee.  For thy merchants were the great men of the earth; for by thy sorceries were all nations deceived.”  (You should also look up Revelation 9:21, Revelation 21:8 and Revelation 22:15).  In all four of those references from Revelation, the Greek words “Pharmakeia,” “Pharmakeus,” and “Pharmakos” are translated “sorcery” and “sorcerers.”

As one writer said, “These Scriptures deal with end time prophecy and describe events that sound eerily familiar to the New World Order and Mystery Babylon’s world deception.”

In researching this article, I found an interesting quote. There was no author listed, but still I believe it is worth mentioning...

“One expert in ancient Greek said another translation of ‘Pharmakeia’ is ‘healing without repentance,’ repentance meaning to change direction. Healing without repentance simply means trying to cure an illness without taking the responsibility of changing the behavior, habits or environment that caused the disease in the first place. For instance, using pharmaceutical drugs to treat an illness without stopping the behavior that caused it, such as  smoking or over-indulgence in food or unhealthy food or carcinogens. Or taking blood-thinning drugs to allow blood to pass through clogged arteries instead of clearing out the clogged arteries and then eating properly to avoid them getting clogged in the first place. People who do not take responsibility for their own health want a magic pill. But just like all magic, it is nothing but an imitation, a trick, fraud... SORCERY.”

I ask you to consider all these things, and now that you’ve been made aware, consider the clear warnings of Scripture: “for by thy sorceries were all nations deceived.” Take heed.

“When a man who is honestly mistaken hears the truth, he will either quit being mistaken or cease to be honest.” (Author unknown).

Friends, there is abundant life and health in Jesus Christ, the Author and Finisher of our faith; the One who created us.  Trying to fill that void with drugs, poisons and sorcery is  deadly.  And taking an admittedly experimental COVID jab out of fear has been proven to be deadly too.  What are we doing to ourselves?  What are we doing to our children?!   There’s a reason our parents and grandparents didn’t take all these drugs they’re pushing today.  They didn’t need them.  They had Jesus.