Evil Must Be Confronted 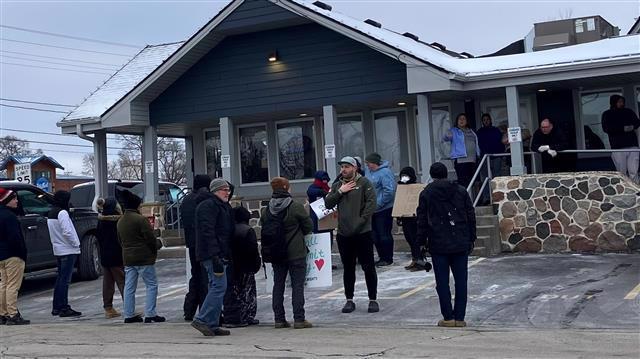 This past Sunday after church service, nearly 50 of us went to the Drag Queen Bingo gathering in Waukesha, Wisconsin. It was 13 degrees outside. About 150 attended the drag queen show – and it included children being taken inside. When I first arrived, a man was yelling at me from the porch of the tavern. When he stopped I asked him “So when did you decide to give up your manhood?” By the look on his face I could tell he hadn’t pondered that much and that he also understood my point.

Most men in America have lost their manhood and what is the duty of a man. We live in a nation which has done this to men systematically and by design – by the government, academia, and the media. And the rot it has produced is growing.

We had some good conversations and some heated ones. Even three pro-abort deathscorts from the baby-murdering deathcamp were there. One mocked me for my arsons before I knew I Christ. I told her Jesus changed my life and offered her my card with my website howJesuschangedmylife.com so she could read of what He did in my life. She took it.

We also preached outside the place declaring His law and pointing men to Christ. Some people passing by went out of their way to stop and thank us for being out there. We were out there for two hours. One man acted like he would run us down with his truck; he then exited his truck and shoved one of the women with our group. Quite the shoving match ensued between a dozen of us and a dozen of them. They learned we are not pacifists.

Six squad cars arrived [see picture below]. The deputies tried to make us leave an area that I explained to them was public right of way. We refused to move (the tavern people had yelled in our faces earlier to get off the area and we had informed them also that it was right of way and refused to move). When the supervisor arrived (as I had requested their superior) he informed both the tavern people and his deputies that we had a right to stand there. The man who shoved the young woman with our group was ticketed.

A BRIEF EXHORTATION:
When evil raises its ugly head, it must be confronted. The sodomites and lawless/immoral people already have the large city magistrates in their pocket. Now they have spent this last year – not only in Wisconsin but in other states that we know of – trying to bring their filth to every hamlet, town, and village. I tell Christians everywhere in these small areas that – you must confront this evil or you will not recognize your community in five years.

I can assure you, this tavern will think twice about hosting such filth again in the future. If there was no response – if no one confronted their evil – they would feel emboldened to continue in their evil and corrupt the lives of more adults and children, and the evil would be further embedded in the community.

We confronted evil publicly. Declared the truth of God’s law and Word. Pointed men to Christ. May Christ be praised!

Here is a link ot my recent sermon entitled Conciliation or Confrontation?

Ps. here is a news article about the drag queen agenda.
Here is a one-minute video clip of what they do at these gatherings and demonstrates that drag queens are not some benign matter. WARNING - very graphic.