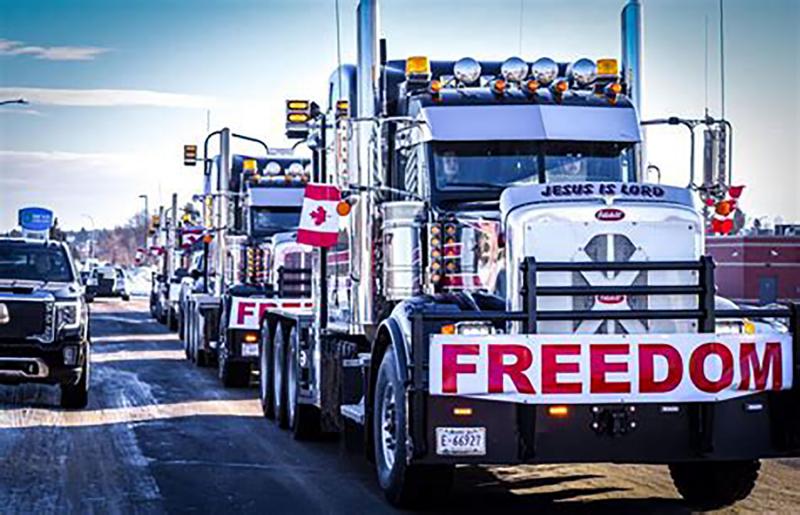 Complimentary Story
The question is inevitably asked, every election cycle: “Are you better off today than you were four years ago?” I think we all know the answer to that, but let’s take a look back at a few of the most important news items from 2022 and see how last year went for us.

On January 1st, we learned that insurance companies were seeing a 40% increase in unexpected deaths, after a year of people getting the depopulation shots.  We also saw millions around the world protest against the COVID lockdowns and restrictions, bringing swift retaliation from the governments onto the people.

Also in January, more than 1,000 scientific studies, references and reports were released linking the COVID jabs to serious adverse side effects and deaths.  And disgraced former governor Andrew Cuomo learned that he would face no charges regarding sexual harassment allegations from 11 women.

The worker shortage was finally acknowledged by the mainstream media in January, as a record 4.5 million Americans voluntarily left their jobs, according to the Bureau of Labor Statistics, and record numbers of businesses closed their doors forever due to the worker shortage. Today, at least 20 million able-bodied Americans are not working.  Meanwhile, 71 million Americans are receiving some type of government income. Note, that doesn’t include the millions of illegal aliens receiving government payouts.

Meanwhile, French president Macron declared the un-jabbed to be “non-citizens,” “the worst enemies of democracy,” and vowed to put pressure on the un-jabbed by limiting, as much as possible, their access to activities in social life.  Biden made similar comments about Americans in a speech last summer.   And commercial pilots began “dropping like flies” after the mandated jabs, according to an airline pilot whistleblower.

The Supreme Court stopped the Biden regime’s enforcement of COVID jabs at large businesses on January 13th. But the Court’s decision still allowed mandated jabs of healthcare workers. Also that day, it was reported that the government is compiling a list of public workers requesting religious exemptions from the jab. The US Army continued to purge soldiers and those in positions of leadership for refusing the shot. No religious exemptions have been granted to Army soldiers.

In Connecticut, a federal court upheld a state law eliminating religious exemptions to state vaccination requirements for school children.  Meanwhile in Australia, it was reported that “fully vaccinated” individuals hospitalized outnumbered the unvaccinated by a margin of 3-1.

As the FED continued their push to destroy the US dollar, it was reported January 20th that a stunning 80% of all US dollars in existence had been printed in just the past two years.  England ended all COVID passports, mask mandates and work restrictions on January 20th.  It was also announced that day that the IRS will now require facial recognition, along with other things, in order to access online accounts.  And the TSA disclosed that illegal migrants flying without proper identification can use an arrest warrant as an alternate form of ID at airport security.

In Maine, an MIT doctor who prescribed Ivermectin for her patients was stripped of her license and forced to undergo a psychiatric evaluation.  In New York a mother and her young child were arrested and taken to jail after refusing to show their “vaccine passports” at the Museum of Natural History. Families of US Embassy personnel in Ukraine were ordered to begin evacuating the country on January 22nd — the same day that the first shipment of military equipment from the US arrived in Ukraine, including 100 tons of “lethal aid,” as war with Russia loomed on the horizon.

It was also reported that the murder rate in the US was the highest in 25 years. More than  20,000 Americans dared to protest in Washington DC in January. The “Defeat the Mandates” protest was led by Robert F. Kennedy, Jr.  Homeland Security closed the Canadian and Mexican borders to un-jabbed truck drivers on January 23rd. The closure, of course, did not apply to un-jabbed illegal immigrants. And the Justice Department announced that it is establishing a specialized unit focused on domestic terrorism...domestic terrorists being those who disagree with the Regime.

The Canadian Truckers’ Freedom Convoy began rolling toward Ottawa with tens of thousands of trucks. The movement was in protest to the unjust, communist dictates of Justin Trudeau and Canadian Parliament. The truckers occupied the area around the Canadian capitol for several weeks, and was supported by millions around the world, who Trudeau called a “fringe minority.”  The Trudeau regime responded by seizing $4 million in donations, forbidding gas stations from selling truckers any fuel, impounding trucks, arresting countless peaceful protestors and freezing the bank accounts of Convoy supporters. GoFundMe seized $9 million in donations to the truckers.  The Canadian protest sparked similar trucker events around the world, but the attempt “fizzled” here in the US.

And Quebec banned the un-jabbed from buying groceries or other items from stores unless they are accompanied by a “health warden.”  The policy went into effect January 24th.

Hundreds of major US retailers began permanently closing store locations due to “smash and grab” attacks and what has now become legalized shoplifting. These types of crimes rose by more than 50% in 2022, as shoplifters brazenly walk through the store aisles, fill up their bags and then walk right past security guards.  Police will no longer even respond to these events in California, if merchandise totaling less than $1000 per person is taken.

In early February, the Dutch insurance company, Aegon, revealed its third quarter 2021 life insurance payouts rose by 258% over the previous year.  The difference, of course, was the deadly “vaccines.” Washington state health authorities ordered a restaurant that defied mask and jab mandates to close. And nearly 300 fully-jabbed people died within one week in Massachusetts.

The “Religion Of Peace” was in the news again in February when an Iranian man beheaded his 17-year-old wife on a public street, then paraded her decapitated head throughout the crowd and posted images of the event on his social media. The murder was justified as an “honor killing.”

On February 7th, it was announced the Biden regime would begin a $30 million program to provide “smoking kits,” including crack pipes and other drug paraphenelia in order to advance “racial equity.”  And on February 18, the CDC admitted it used their PCR tests to harvest peoples’ DNA without their consent.

The Russia/Ukraine conflict began in late February and millions have taken the side of Ukraine, even though it’s among the top three most corrupt countries in the world.  Things are not as the mainstream media would have us believe there.  Oil and gas prices began to soar, and the Biden regime blamed Russia for that. Meanwhile, Ukraine began destroying evidence of US-funded and operated bio-weapons labs in that country.  The US has been steadily funneling money to Ukraine ever since, now in the trillions of dollars.

DHS secretary Mayorkas announced the government will target anyone who believes the 2020 election was stolen, opposes the official talking points regarding COVID or the jabs or objects to the actions of public school boards.  And inflation officially rose to 10% in March, though the actual numbers are much higher.

World Net Daily released a report in March showing that Millennials have experienced an 84% increase in excess deaths since the COVID jabs were introduced.  The New York Times acknowledged the authenticity of Hunter Biden’s laptop and it’s contents, long after multiple sources — including Hunter Biden himself — admitted the information was accurate and true.  Hunter is still free.

Florida Governor Ron Desantis signed a law forbidding sexual grooming of children in public schools up to third grade.  In response, Disney vowed to produce even more sodomite content for children.   Meanwhile, Amazon, one of the biggest supporters of the Left’s ‘woke’ agenda, relocated nearly 2000 employees out of Seattle, due to a huge increase in crime there.

Residents of Boulder, Colorado were evacuated due to wildfires that threatened 19,000 people.  And a massive drought from the west coast to the Mississippi River caused more wildfires throughout the year.  And an analysis by the Center for Immigration Studies showed the US had a new record high of 46.7 million illegal residents in 2022.

Amazingly, 117 food processing plants were mysteriously destroyed in 2022.  In addition, the food supply shortage was worsened by the culling of millions of heads of cattle and poultry, because of alleged illnesses. Among humans, a new health crisis emerged, which they’re calling “Sudden Adult Death Syndrome.”

Ketanji Brown Jackson was confirmed to sit on the US Supreme Court.  Biden’s litmus test for the new judge was that it needed to be a black female, although during hearings, she was unable to define what a “woman” actually is.  Ten people were shot and 29 injured in a New York subway in April, as violent crime continued to surge throughout the year nationwide.  Border state governors began sending bus loads of illegal migrants to Washington DC and other Leftist strongholds around the country, including Martha’s Vineyard, in September. The “inclusive” and “compassionate” residents of the Vineyard got rid of them in under 24 hours.

Attacks on pro-life and traditional family organizations began on Mother’s Day.  A group known as Jane’s Revenge — and others — have firebombed, vandalized and terrorized  nearly 150 organizations since then.  The attacks began before the Supreme Court overturned Roe v Wade on June 24th.  I should mention the doubling- and tripling-down on the “transgender” agenda, now being pushed nationwide to our young people. “Lia” Thomas became a hero to the “woke” Left when this man, in women’s swimwear, won the women’s 500-yard freestyle in March.

Donald Trump’s home in Florida was raided by the FBI in August.  The Queen of England died September 8th.  Nearly 100% of Central Banks began pushing for a World Digital Currency in 2022.  And as gas prices continued to rise, the US sent more oil from our Strategic Petroleum Reserve to Europe, even as Biden began begging Saudi Arabia to sell us oil.

There were a great many more very important things that happened in 2022, but space doesn’t allow to remind you of them all here. Suffice to say, America and the World is on a “woke,” downward spiral toward a totalitarian One World Government Beast System.  There is no political solution.  There is no “revolution solution.” Our only solution is solemn repentance and a return to God the Father and Jesus Christ, our Lord. Failing that, we must await that Great and Terrible Day, when every knee will bow and every tongue confess.