The Silent Invasion of America 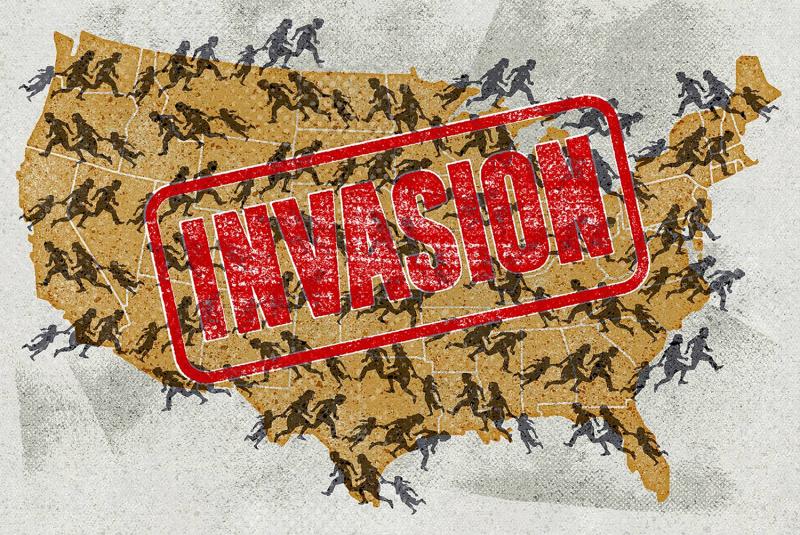 The final sentence of a recent article written by distinguished author and historian Victor Davis Hansen exquisitely captures what many people are feeling today.

“We are beginning to wake up from a nightmare to a country we no longer recognize, and from a coup we never knew.”

It’s difficult to comprehend how quickly the United States is being taken over by Globalist-Communist forces facilitated by those elected and appointed to protect us and our nation.  During the last two years alone, our 1,969-mile-long southern border has been essentially erased, the weaponization of our justice system to punish Conservatives, pro-life advocates, Christians, and patriotic Americans is almost complete, our military gutted by serial perversity and pseudo-diversity, and much of our most fertile and strategic land has been permitted to be sold to adverse foreign powers – specifically China.

It’s a silent invasion and occupation that has been ongoing for decades, although has exponentially ramped up since the 2020 coup of our presidential election. Regarding that, we have a major problem when Ruby Freeman and her daughter Shaye Moss.  The infamous election worker duo from Atlanta, Georgia, were awarded the Presidential Citizens Medal by Biden on Friday, January 6, 2023, instead of a fistful of subpoenas and perhaps an indictment or two. Instead of American men handling matters in 2020 like a group of World War II veterans did in McMinn County, Tennessee in 1946, known as “The Battle of Athens,” we stood by as our nation was under siege at politically blue strongholds across our fruited plain.

Chinese Communist Takeover
As of December 31, 2020, Communist China owns 325,686 acres of U.S. farmland, according to the most recent numbers published by the USDA. Just ten years prior in 2010, China owned only 13,720 acres of agricultural land.

If you wonder why China would purchase land in the U.S., consider that China is home to about 20 percent of the world population, but has less than nine-(9) percent of the world’s productive farmland to feed their country. Additionally, some of the land is strategically located, near critical U.S. military bases and infrastructure.

For example, Biden’s recent decision to allow a Chinese company to own 370 acres of land within 12 miles of the Grand Forks Air Force Base in North Dakota could have ominous consequences for America.

China can use a proposed $700 million corn milling plant on this site to monitor and intercept military communications, and perhaps even disrupt them when they deem necessary. The severity of this national security threat, complete with Biden’s imprimatur, certainly should be considered treasonous to any reasonable American.

As I’ve previously written exclusive to Wisconsin Christian News, Hunter Biden’s abandoned laptop contains ample evidence of deals, similar in nature, where the Biden crime family made financial gains through their deals with Communist China, Ukraine, and other countries at great expense to our national security.  The Biden crime family raked in approximately $31 million in “influence payments” from China, according to information derived from Hunter’s laptop and other authenticated communications.

Another example of the Biden and DC Uni-party in action took place during Barack Hussein Obama’s illegitimate occupancy of the White House and Biden’s stint as Vice President. Smithfield Foods, Inc., the largest pork producer in the United States, was sold to a company with close ties to the Communist Chinese party in in September 2013, for $4.7 billion — a sale that was approved by the Committee on Foreign Investment in the United States (CFIUS).  Included with this deal was more than 146,000 acres of farmland in four states (North Carolina, Missouri, Utah, and Virginia), complete with hog farms and processing plants.

Chinese companies and individuals tied to the CCP are also ramping up their purchases of both commercial and residential real estate.

One does not need to stand on the beach with binoculars to watch for invading Chinese ships when the actions of the globalists, who obtained their positions through the soft coup of election tampering, are already on their second helping of Orange Chicken and studying Mandarin in the bowels of DC and their mansions at the state capitals.

Illegal Aliens
The number of illegal aliens who’ve entered the United States since Biden took office, less than two years ago, has climbed to just under six million. For perspective, that’s the approximate equivalent of the combined population of Montana, North Dakota, South Dakota, Maine, Rhode Island and Delaware. And those are just the illegal aliens we know about. More are coming every single day. Let that sink in for a little bit.

Furthermore, a surge of illegal aliens from Venezuela, Cuba, and Nicaragua this past September alone brought the number of illegal crossings to the highest level ever recorded in a fiscal year. Nearly 78,000 illegal aliens from those countries were stopped in September, representing a 245 percent increase compared to the previous September. With the uncertainty of Title 42, that number is expected to exponentially increase.

Lockdowns, CCP Style
Perhaps done so Americans wouldn’t notice the change taking place, lockdowns and curfews of “indefinite duration” were being considered – in the style of China – as early as February 2020 by the operatives of the “deep state.” The WHO was promulgating China’s lockdown measures as global policy, and many of the US governors and health officials were on-board with such measures. The entire COVID-19 planned-demic contains numerous questions that require serious investigation, as the CCP style response has done incalculable damage to the U.S. and the entire world. The decisions, however, rested with the same cast of characters we see dismantling our nation through their policies today.

Ominous Signs of Kinetic Pushback
Considering the severity of the limited examples above, is it any wonder that Americans underwent 16,425,484 background checks for gun sales in 2022? These checks for gun purchases make 2022 the third highest year on record of NICS checks for gun sales. The number as it applies to actual gun sales is only an estimate — a low estimate — as guns transferred or bought by concealed carry permit holders in states where permits allow individuals to forgo NICS checks at point of purchase are not included.

Many Americans are waking up. As Victor Davis Hanson so eloquently stated, indeed, many are starting to see something is very wrong, as if we are beginning to wake up from a nightmare to a country we no longer recognize. The question is whether we have the courage to do anything about the many problems we have allowed to grow since our reluctant acceptance of an obvious stolen election. Or will we allow this silent invasion to continue?